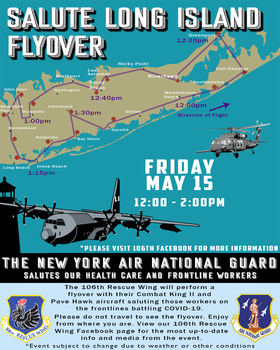 The 106th Rescue Wing will Salute Long Island on May 15 by flying one HC-130J and two HH-60G rescue helicopters over Long Island towns and hospitals starting at noon.

WESTHAMPTON BEACH, N.Y. (05/14/2020) (readMedia)-- In order to be seen by more Long Island residents, the New York Air National Guard's 106th Rescue Wing has expanded the route of the Salute Long Island flyover it will conduct on Friday, May 15.

A search and rescue plane and two rescue helicopters assigned to the New York Air National Guard's 106th Rescue Wing will conduct a flyover around Long Island on Friday, May 15 to salute healthcare, essential workers and first responders dealing with the COVID-19 pandemic.

The flyover, which will begin approximately 12 p.m. over Westhampton will proceed counterclockwise around Long Island. It will conclude by 2p.m.(Please see the attached graphic)

The flyover will feature one of the wing's HC-130J search and rescue aircraft and two HH-60G rescue helicopters flying in formation.

The flyover is part of a nationwide series of flyovers conducted to honor those on the frontlines of the pandemic.

The formation will take off from Gabreski Air National Guard Base shortly after noon on May 15. The flyover route will go over a number of healthcare facilities to include: