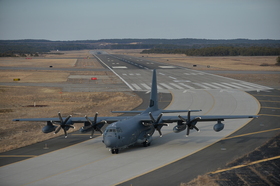 The new HC-130J Combat King II aircraft have improved navigation, threat detection and countermeasures systems and greater range than the older aircraft it is replacing.

WHO: Airman and leaders of the 106th Rescue Wing.

WHAT: A ceremony to officially introduce local officials and the community to the HC-130J Combat King II search and rescue aircraft. The wing will operates four of these fixed wing aircraft which can be used to refuel HH-60G Pave Hawk search and rescue helicopters and drop pararescue teams and equipment.

WHEN: 10 a.m., Friday, May 17. (Media show time is an hour before the event officially begins)

Media members must contact Capt. O'Hagan at 106threscuewing@gmail.com or (609) 234-2636 prior to noon on Wednesday, May 15 with the full name and contact number of the individuals who plan to cover this event.

Reporters will be able to interview unit leaders and members and shoot video and static pictures of an HC-130J on display.

The 106th Rescue Wing operates HC-130J Combat King search and rescue aircraft and HH-60G Pave Hawk helicopters supporting the Air Force's personnel recovery mission. The 106th Rescue Wing is manned by more than 1,000 military and civilian personnel and also performs civil search and rescue missions as well as being able to assist with state disaster relief and other state emergencies as directed by the Governor of New York.

Members of the 106th Rescue Wing helped evacuate almost 1,500 Americans from the Island of St. Maarten following Hurricane Irma in 2017 and also conducted over 500 rescues in the Houston area after Hurricane Harvey that same year.

Modifications to the HC-130J have improved navigation, threat detection and countermeasures systems. The aircraft fleet has a fully-integrated inertial navigation and global positioning systems, and night vision goggle, or NVG, compatible interior and exterior lighting. It also has forward-looking infrared, radar and missile warning receivers, chaff and flare dispensers, satellite and data-burst communications, and the ability to receive fuel inflight via a Universal Aerial Refueling Receptacle Slipway Installation (UARRSI).

The HC-130J can fly in the day; however, crews normally fly night at low to medium altitude levels in contested or sensitive environments, both over land or overwater. Crews use NVGs for tactical flight profiles to avoid detection to accomplish covert infiltration/exfiltration and transload operations. To enhance the probability of mission success and survivability near populated areas, crews employ tactics that include incorporating no external lighting or communications, and avoiding radar and weapons detection.

Drop zone objectives are done via personnel drops and equipment drops. Rescue bundles include illumination flares, marker smokes and rescue kits. Helicopter air-to-air refueling can be conducted at night, with blacked out communication with up to two simultaneous helicopters. Additionally, forward area refueling point operations can be executed to support a variety of joint and coalition partners.

The HC-130J is a result of the HC/MC-130 recapitalization program and replaces Air Combat Command's aging HC-130P/N fleet as the dedicated fixed-wing personnel recovery platform in the Air Force inventory. The 71st and 79th Rescue Squadrons in Air Combat Command, the 550th Special Operations Squadron in Air Education and Training Command, the 920th Rescue Group in Air Force Reserve Command and the 106th Rescue Wing, 129th RQW and 176th Wing in the Air National Guard will operate the aircraft.

First flight was 29 July 2010, and the aircraft will serve the many roles and missions of the HC-130P/Ns. It is a modified KC-130J aircraft designed to conduct personnel recovery missions, provide a command and control platform, in-flight-refuel helicopters and carry supplemental fuel for extending range or air refueling.

In April 2006, the personnel recovery mission was transferred back to Air Combat Command at Langley AFB, Va. From 2003 to 2006, the mission was under the Air Force Special Operations Command at Hurlburt Field, Fla. Previously, HC-130s were assigned to ACC from 1992 to 2003. They were first assigned to the Air Rescue Service as part of Military Airlift Command.

The $66 million aircraft is manufactured by Lockheed Aircraft Corporation.