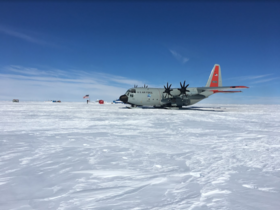 An LC-130 assigned to the New York Air National Guard's 109th Airlift Wing on the ice in Greenland during the Polar Reach exercise in 2019.

The team is expected to return around March 10.

The exercises are designed to practice operations in extreme cold weather to defend Alaska and provide military support to civil authorities.

Alaskan Command serves as the host headquarters for the training exercise scheduled February 24 -March 6, 2020 which tests the military's ability to operate in the far north.

A thousand U.S. military personnel will participate in the multi-service Arctic Edge exercise along with members of the Canadian Armed Forces.

"The Arctic is more accessible than it has ever been, we want to make sure we are playing our part in meeting the Department of Defense objectives for Arctic strategy," said Capt. Eric Chan, a LC-130 pilot.

The 109th will be showcasing their ability to build and sustain a ski landing area and an extreme cold weather camp in the far north of Alaska.

Fifteen personnel and supplies will be dropped off by Twin Otter airplanes from the Royal Canadian Air Force, where they will build a skiway – a marked area for the ski-equipped plane to land--and forward operating base to allow LC-130s to land and operate at that location.

During the two weeks out on the ice, Airmen from the 109th will also teach personnel from the New Hampshire Air National Guard and the U.S. Navy how to build and maintain remote skiways and extreme cold weather camps.

Another part of the exercise is to provide airlift support for ground forces and work with the U.S. Marine Corps in a live fire exercise with utilizing the High Mobility Artillery Rocket System, known as a HIMARS.

A HIMARs is a truck mounted missile launcher system that can put six smaller rockets or one large missile on a precise target location. The system is built so it can be carried on board a C-130.

The 109th will work together with a Marine HIMARS rocket artillery company to load the weapon system onto an LC-130, fly to a specific destination, roll the system off of the plane and fire it. It will then be loaded back onto the aircraft and flown back to the starting point.

"We need to make sure we have the training and capability to deal with conflict or competition in the Arctic," Chan explained.

"With more and more shipping and cruise ships happening in the Arctic, we can supplement search and rescue capabilities if needed. We also have the ability to sustain forward operating locations, refueling points and extend the military range into the Arctic Circle."

The 109th Airlift Wing flies the largest ski-equipped aircraft in the world, the LC-130 version of the Hercules C-130 transport. The planes can land on snow or ice in locations where other aircraft cannot go.

The 109th Airlift Wing provides support to National Science Foundation research in Antarctica and Greenland and also works with the Canadian Forces and other allied nations to provide support for operations in the Arctic.