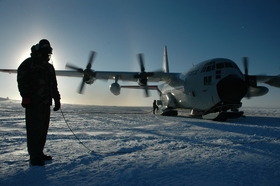 WHO: Six members of the 109th Airlift Wing.

WHAT: The departure of the first LC-130 from Stratton Air National Guard Base for the American base at McMurdo Sound. The ski-equipped LC-130s operated by the 109th Airlift Wing are the only aircraft in the United States military capable of landing on snow and ice.

All supplies that reach the United State's Amundsen –Scott base at the South Pole are ferried there by the 109th. Over the last eleven years the New York Air National Guard crews have conducted 1,000 missions to the South Pole and back, moving 25 million pounds of cargo as the station has been rebuilt.

During the season about 120 wing members are "on the ice" at any one time, flying and maintaining the aircraft. The wing's members work 12 hour days for six days each week and then work a half day on Sunday.

Wing members rotate through McMurdo. The minimum tour is three weeks at the station. The time involved in getting there means wing members are away from home for four weeks while supporting the missions.

All wing members who go to the Antarctic receive specialized survival training.

Operation Deep Freeze, overseen by the 13th Air Force at Hickam Air Force Base in Hawaii, provides logistical and operational support to the U.S. Antarctic Program and the National Science Foundation.

Christchurch International Airport, New Zealand, is the staging point for deployment to McMurdo Station, Antarctica, a key research and operations facility for the U.S. Antarctic Program.

Active-duty, National Guard and Reserve personnel from the Air Force, Navy, Army and Coast Guard work together as part of the joint task force. This team continues the tradition of U.S. military support to the U.S. Antarctic Program and demonstrates the United States' commitment to a stable Pacific region.