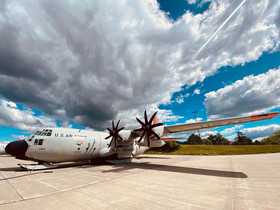 Three LC-130 ski-equipped aircraft from the 109th Airlift Wing, like this aircraft, will deploy to New Zealand Nov. 23 to be on standby to fly to Antarctica for emergency missions if required.

LATHAM, NY (11/19/2020) (readMedia)-- Airmen and Aircraft from the New York Air National Guard's 109th Airlift Wing will not be flying to Antarctica this year to provide logistics support to the National Science Foundation's U.S. Antarctic Program.

Instead, the wing will deploy three LC-130s and three aircrews and a maintenance team, a total of 31 Airmen, to Christchurch, New Zealand where they will be on standby for contingency missions that require flying to Antarctica.

Members of the press are invited to cover the departure of the aircraft for New Zealand on Monday, November 23. Aircraft will depart at 8 a.m., 9 a.m. and 10 a.m.

The change in mission is being made because of the COVID-19 pandemic. The National Science Foundation is minimizing the number of people who set foot on the continent during the 2020-21 season as part of a commitment by the United States and other nations to prevent the introduction of the COVID-19 virus to Antarctica.

The footprint of activity will be "reasonably reduced," according to the National Science Foundation.

For the past 32 years the 109th Airlift Wing has flown 6 to 7 LC-130 ski-equipped aircraft and around 250 personnel to McMurdo Station, the National Science Foundation facility on the continent which serves as the hub for U.S. research activities. The 109th provided airlift for people and supplies across Antarctica as part of Operation Deep Freeze, the U.S. military logistics support to the U.S. Antarctic Program.

"Despite the complications of operating during the Covid-19 Pandemic, the 109th Airlift Wing will continue its support of the National Science Foundation," said Col. Christian Sander, the wing's vice commander. "Personnel and aircraft will operate during the timeframe when only ski-equipped aircraft may operate within Antarctica; while adhering to all international and Center for Disease Control guidelines."

Sander will be in command of the deployed aircraft and personnel.