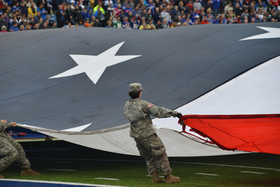 BUFFALO, NY (11/07/2014)(readMedia)-- 150 New York Army National Guard Soldiers from across the state will be honored by the Buffalo Bills on Sunday, Nov. 9 during Military Appreciation Day at Ralph Wilson Stadium.

The Soldiers will open the 1 p.m. game against the Kansas City Chiefs by unfurling a giant American flag on the field.

During half-time, fifty Soldiers will reaffirm their oath of enlistment led by Major General Patrick Murphy, the Adjutant General of New York.

Two soldiers--Specialist Tanika Mack, a resident of Buffalo and a member of the Buffalo-based 153rd Troop Command and Staff Sgt. Ethan Hall, from Otego and a member of the 42nd Infantry Division's Operations Company-will get special recognition. Mack is being recognized for her service during Superstorm Sandy when her unit deployed from Buffalo to New York City. Hall was recently selected as the "best warrior" in the 42nd Infantry Division and earned the Combat Infantryman's Badge during a deployment in Afghanistan.

"It's great to see the men and women of the New York Army National Guard being recognized for their service here at home and overseas, " Murphy said. "We appreciate the support New Yorkers from around the state show for our Citizen Soldiers."