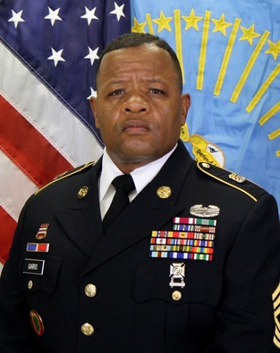 Garris will assume the role from Command Sgt. Maj. Anthony McLean during a Change of Responsibility ceremony at the brigade's Syracuse headquarters. The command sergeant major of an Army unit is the commander's chief advisor on issues involving Soldiers.

Members of the press are invited to attend.

WHAT: A ceremony during which the Brigade's colors (flag) will be passed from McLean to Garris. The tradition signifies the new responsibility of the senior NCO in the command for good order and discipline among its more than 3,000 troops spread across New York and Massachusetts.

McLean, an Iraq war veteran and retired New York City police detective, has been the brigade's Command Sgt. Maj. since 2018. He is retiring after more than 39 years of military service.

WHERE: Thompson Road Armory, Syracuse. Enter via Hancock Field Air National Guard Base main gate on East Molloy Road (between Thompson and Moore Roads). Media asked to arrive no later than 12:30 for escort and setup.

Still and video images of the ceremony. There will be an opportunity to interview both Garris and McLean.

Members of the press must call Capt. Avery Schneider at 917-443-1864 for access to this secure military facility. Press must have identification and wearing of face masks will be required.

In civilian life Garris is a District Captain with the Buffalo Police Department, and brings 32 years of military service to the senior NCO role. He served in the active duty Army in Germany, Georgia, and Texas from 1983 to 1994. Garris joined the Army National Guard in 1999 and has held senior roles at the battalion, brigade, and division level, as well as in the FEMA Region II Homeland Response Force.