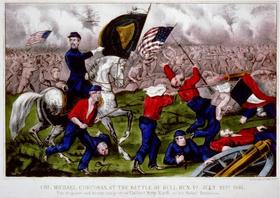 The 69th New York State Militia Regiment saw heavy combat at the 1st Battle of Bull Run but the men still enlisted for three years of duty in the Union Army.

SARATOGA SPRINGS , NY (08/02/2011)(readMedia)-- Within a month of suffering 40 dead and 60 wounded at the battle Bull Run On July 21, 1861, troops of the 69th New York Militia Regiment had enlisted for three more years of fighting -- settling in, along with the rest of the north, for a protracted war.

Shocked by the rebel victory at Bull Run, President Abraham Lincoln and other officials began calling for more soldiers in the summer of 1861, but most of the 69th New York Militia Regiment had signed up already, moving from state to federal service for the long haul.

The 69th New York State Militia was sent home after 90 days of service and 840 militiamen muster out of active service on August 3, 1861. But on August 30 1861 the 69th New York Volunteer Infantry, composed of the same Soldiers, was mustered into federal service.

"My heart, my arm, my life is pledged to the national cause, and to the last it will be my highest pride, as I conceive it to be my holiest duty and obligation, to share its fortunes," unit member Thomas Francis Meagher said at benefit after the unit's return to New York on July 27. Morale in the unit and Irish community remained high despite the Union defeat at Bull Run, allowing Meagher –- an Irish nationalist who was promoted from captain to colonel after the battle -- to form the Irish Brigade from the 69th New York militia.

The crowds who had camped out for the 69th New York militia's return saw a force thinned by the strain of combat and winnowed by the Battle of Bull Run, where it had suffered casualties in repeated assaults on Confederate artillery positions.

As the unit paraded down Broadway, people noticed the troops' mismatched and missing uniform items, which the New York Times attributed to the soldiers shedding clothing "for the comfort of 'sailing in with perfect looseness'" during the southern operations. But the troops were "browned with the fervid rays of a Southern sun, and look wiry and firm-limbed, with nothing of the easy nature of fat about them, but evidently a good deal of muscular power to bestow upon the obdurate."

"Some of them, to be sure, presented a rather disheveled appearance, but there was an eager gladness in their eyes which compensated for defects of toilet," the paper said. "The men bear all the appearance of having seen service in a rough field, as indeed they have." The crowd, already enthusiastic, surpassed the soldiers' morale and "pressed closer to the troops, as if it longed to hug them."

"And, in good truth, a portion of the said crowd, acting independently towards a favored portion of the said troops, actually did perform this pleasing ceremony," the paper said. "Everyone in that dense throng seemed to know someone in the regiment, and when the party made his appearance, there was a shrick (sic) of welcome to attract his attention, and a flood of kindly greeting to pour into his ear." Police had difficulty controlling the crowd, the paper went on to say.

Though the attack on Fort Sumter had galvanized Irish-Americans' support for the Union, their motives for enlisting weren't limited to patriotism, Susannah Ural Bruce said in her book about the Irish volunteers in the Union Army, The Harp and the Eagle. Many were Fenians, Irish nationalists opposed to British Rule of that island, who had fled from Ireland to America to escape oppression, and their devotion to their adopted land was linked to their love of their native one.

"The republic, that gave us asylum and an honorable career – that is the mainstay of human freedom, the world over – is threatened with disruption," Meagher said after the war began. Every citizen was duty-bound to prevent that, especially Irish-Americans, "who aspire to establish a similar form of government in our native land," he stressed. Meagher used these same points in his drive to recruit soldiers for the Irish Brigade.

In less than three weeks, most of the 69th New York militia soldiers re-enlisted, for three years, in the Irish Brigade. Though Meagher's recruitment campaigns in surrounding states failed to immediately garner the manpower to create the robust, elite unit he had envisioned, Meagher was promoted to brigadier general to command it and the 69th became one of its regiments.

The brigade took part in the battle of Antietam in 1862, where Confederate Commander Gen. Robert E. Lee dubbed the 69th Infantry Regiment the "Fighting 69th" after they routed the Louisiana Tigers, a Confederate Irish Regiment. The regiment suffered 60 percent casualties at the battle, and almost ceased to exist after getting slaughtered while charging Marye's Heights at the battle of Fredericksburg later that year.

The regiment was down to 300 Soldiers after the battle of Chancellorsville in 1864, and extreme losses in the Irish Brigade as a whole led to its disbandment by the Army in 1864. The "Fighting 69th," however, made good its losses, returned to the fight in the summer of 1864, served until the end of the war and was present when Lee surrendered at Appomattox.

The regiment became part of the New York National Guard, and over the years, through wars and reorganizations –- including both World Wars and the Global War on Terror -- it eventually became the 1st Battalion, 69th Infantry. Based in New York City, it reflects the multitude of cultures that make up the United States Army and America, but retains a green background on its unit insignia to reflect the old facings of the 69th Infantry Regiment.

More than 500,000 New Yorkers enlisted in the Army and Navy during the four years of the Civil War and 53,114 New Yorkers died.