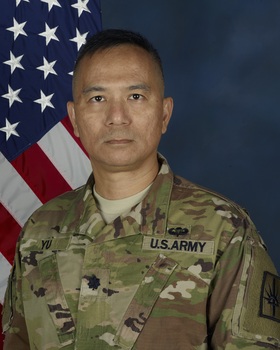 The battalion also has elements in Kingston in the Hudson Valley, Walton, Horseheads and Buffalo.

WHO: Lt. Col. Wing Yu, the incoming commander; Lt. Col. Christopher Guilmette, the outgoing commander, and the men and women of the 204th Engineer Battalion.

WHAT: Traditional change-of-command ceremony in which Lt. Col. Guilmette will hand the battalion flag, commonly called the colors, to Lt. Col. Yu to mark the transition from one commander to another.

WHERE: Traditions at the Glen, 4101 Watson Blvd, Johnson City, NY, in the Glen View Tent

For information and access on the day of the event reporters can contact Staff Sgt. Kristen Walker, battalion personnel NCO at 607-763-3102.

The Change of Command:

The Change of Command Ceremony dates back to the days in which a military unit's flag marked its position in the line of battle. The colors were always near the commander, so troops knew where to rally on the battlefield. Today the transfer of the colors marks a change in the unit and givens the soldiers their first opportunity to see and hear their new leader.

The change of command ceremony recognizes the accomplishments of the outgoing commander and the Soldiers who served under him. In addition, the ceremony identifies the new commander to the Soldiers, so they can follow him on the field of battle.

In 1994, he was commissioned a Second Lieutenant from the Reserve Officers Training Corp and served on active duty as a combat engineer with assignments as Platoon Leader and Support Platoon Leader in Camp Howze, Republic of Korea.

In 1999, Yu rejoined the New York Army National Guard, and was assigned to Camp Smith Training Site near Peekskill, NY as the facilities maintenance officer.

He became the AGR full time operations officer at Camp Smith in 2002 with follow on assignments as the environmental officer.

Yu deployed to Afghanistan in 2008 as the electrical and garrison engineer responsible for construction projects. In 2011, he was assigned as the Executive Officer of 642d Aviation Support Battalion in Rochester, NY where he deployed to Kuwait in late 2013.

Upon his return from deployment in early 2009, Yu was then assigned to the 42d Infantry

His most recent assignment prior to taking command of the 204th Engineer Battalion was as the Liaison and Administrative Officer responsible for the establishment and operations of the10th Mountain Division's Main Command Post Operational Detachment located in Syracuse, NY.

He currently resides in Watertown, NY with his wife Michelle.

His two past deployments were in 2003 in Canada and also in 2012 in support of Operation Enduring Freedom (OEF) Kuwait as the Brigade Engineer for the 27th Infantry Brigade Combat Team.

Guilmette was called for NY State Active Duty Mobilizations on eight different occasions during his two tenures with the 204th.

He holds a Bachelors in Electrical Power Engineering from Rensselaer Polytechnic Institute (RPI), conferred in December 1996. He is also a Licensed Professional Engineer in New York State.

He currently working on his Master's Degree at the Army War College.

He is currently employed as a Principal Engineer with KW Mission Critical Facilities located in Troy, NY and resides in Voorheesville, NY with Kelly, his wife, and three sons, Trevor, Eric and Andrew.

The battalion headquarters company and forward support companies, and the battalion's quarry detachment, are based at the Binghamton Armory. The battalion has subordinate companies in Kingston in the Hudson Valley, Walton, Horseheads and Buffalo.

The 827th Engineer Company, based in Horseheads and Walton just returned from a yearlong mobilization and deployment to Afghanistan. That company specializes in repairing roads.

he 152nd Engineer Company in Buffalo is specially trained in the skills needed to rescue victims from a destroyed building, along with basic combat engineer tasks.

The 1156th Engineer Company in the Hudson Valley specializes in vertical engineering; the construction of buildings and other basic facilities.