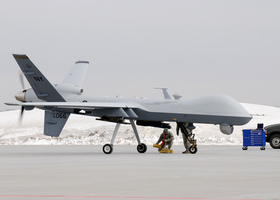 OSWEGO, NY (06/13/2012)(readMedia)-- The New York Air National Guard, the US Coast Guard Station Oswego, the Coast Guard Auxiliary, and the New York Naval Militia will work together on Lake Ontario next week in an exercise testing the ability of small boat crews to work with Air Force ground controllers and MQ-9 remotely piloted aircraft. The skills exercised can be used to find missing boaters or in maritime security missions.

Members of the press are invited to attend a press conference on Thursday, June 14 in which the purpose of the exercise will be outlined by Air Guard and Coast Guard officials.

WHAT: A press conference outlining the exercise planned for June 18 and 19. Members of the 174th Fighter Wing and the 274th Air Support Operations Squadron will explain how the exercise will work and its goals. Representatives of the United States Coast Guard and the New York Naval Militia will also be on hand. Boaters on the lake make see some of this activity.

The press conference will take place at the Coast Guard Station Oswego's pier with boats in the background. The 174th FW will provide charts to explain the exercise and these will be available digitally to the media. Video of the MQ-9 operating can be found at the New York State Division of Military and Naval Affairs website YouTube page or on the 174th Fighter Wing website. An Airman trained as a Joint Terminal Attack Controller, or JTAC, will be on hand to explain the equipment being used by the New York Air National Guard personnel in the joint exercise.

The two day drill will test the ability of Air National Guard JTAC Airmen on board United States Coast Guard and New York Naval Militia vessels to work with the pilot and sensor operator controlling the MQ-9. The aircraft will fly from Fort Drum's Wheeler Sack Army Airfield and Hancock Field Air National Guard Base and locate a target boat in Lake Ontario. The exercise will develop the skills the Air Force teams need to operate in a maritime environment.

The exercise will give Coast Guard Station Oswego , Coast Guard Auxiliary and Naval Militia crews experience in working with Air Guard JTAC and air assets to accomplish a search and rescue mission or a security interdiction mission.

This presents a good opportunity to practice using Air Force and Air National Guard assets as a force multiplier for the Coast Guard in maritime search and rescue.

The MQ-9 will operate in the already existing military flight training area over eastern Lake Ontario.

Headquartered at Hancock Field Air National Guard Base in Syracuse the New York Air National Guard's 174th Fighter Wing operates MQ-9 Reaper Aircraft in combat air patrols over Afghanistan on a daily basis from a command center at the base. The wing is also responsible for training all MQ-9 pilot s and sensor operators and MQ-9 mechanics in the United States Air Force. Wing personnel also rotate into Air Expeditionary Wings located around the world and respond to New York State emergencies and security missions here at home.

The 274th ASOS is a Tactical Air Control Party (TACP) unit that commands, controls, and coordinates Close Air Support (CAS) for an army maneuver unit. Their mission is to advise U.S. Army ground Commanders on how to best utilize US and NATO assets for CAS. Airmen trained as Joint Terminal Attack Controllers or JTACS can provide ground commanders with visual imagery from MQ-9 and other air assets and call in precision air attacks when required using state of the art equipment.

Since 1891 the Naval Militia has responded to emergencies and taskings throughout New York State, providing assistance and support at the direction of The Adjutant General. Nearly all members of the Naval Militia also belong to the reserve components of the United States Navy and Marine Corps and agree to perform state service when asked.

The New York Naval Militia is recognized by United States code (Title 10), and has established partnerships with many federal and state agencies including the U.S. Coast Guard, the U.S. Border Patrol and the New York State Office of Parks, Recreation and Historic Preservation. The Naval Militia's Military Emergency Boat Squadron operates nine patrol boats which can be employed in support of law enforcement and for security, disaster response, and search and rescue missions.