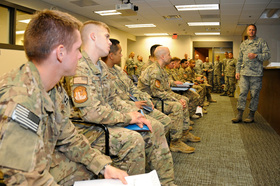 Airmen of the 105th Base Defense Squadron are welcomed home by Col. Timothy LaBarge, the commander of the 105th Airlift Wing. (Tech Sgt. Michael O'Halloran)

The Airmen's return was delayed by bad weather and a landing incident involving a Southwest Airlines 737 at LaGuardia Airport.

The Airmen supported Department of Defense security operations in Parwan Province in northwestern Afghanistan. Security Forces members serve as the Air Force's ground combat element, conducting missions in and around facilities to secure them.

Members of the 105th Base Defense Squadron have deployed six times in support of Air Force operations partnering with the 820th Base Defense Group, Moody AFB GA.

Two Stewart Airmen have been presented Purple Hearts for wounds suffered in action and multiple Bronze Stars awarded to squadron members since the unit took on this new mission in 2010.