Christmas stockings for every inmate 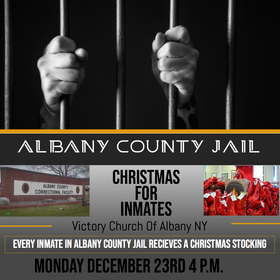 ALBANY, NY (12/18/2019) (readMedia)-- Albany County Jail inmates are in store for a Christmas surprise every inmate will receive a stocking filled with goodies, over 400 inmates will be given a stocking with a personal Christmas card.

Victory Church of Albany runs a gift cards for illegal handguns event called gifts for guns campagn for the entire month of December and runs two services at the jail every Sunday night. This year they have decided to make Christmas very special for every inmate in the jail. Every stocking will have a Christmas card with a personal note to encourage every inmate to make a decision to change there ways from wrong to right and to turn in any illegal handguns they have, when they get out of jail.

This is the first time this has been done in Albany County Jail.