Organization to be honored for work in Arbor Hill, South End and at King's Place 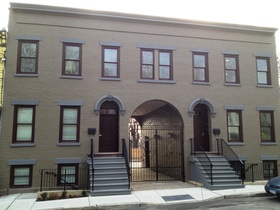 ALBANY, NY (05/01/2013)(readMedia)-- The Preservation League of New York State has selected the Albany Housing Authority to receive an award for Excellence in Historic Preservation as an outstanding organization.

"Albany, like many upstate cities, has struggled with the issue of vacant and abandoned buildings. While other municipal organizations have made the decision to raze and rebuild, the Albany Housing Authority has committed to retaining and restoring the historic buildings that give the city's neighborhoods their distinctive, historic ambience," said Jay DiLorenzo, president of the Preservation League. "The rehabilitation of houses in Albany's South End and Arbor Hill neighborhoods is a sustainable choice that bolsters the desirability of urban living for clients of the Housing Authority and neighbors alike. Finally, by providing space for the administrative offices of the Albany County Historical Association in the renovated King's Place property, the Housing Authority has forged a strong partnership with one of the beacons of Arbor Hill's cultural, historic and artistic renaissance."

Mayor Gerald Jennings called the King's Place project "another significant milestone in achieving the goals we set forth in the Arbor Hill Neighborhood Plan of 2003," while Michael Yevoli, Commissioner of Development and Planning and the President of the Capitalize Albany Corporation, described the Albany Housing Authority as an "exceptional partner in our revitalization of the Arbor Hill neighborhood."

Darren Scott, the Director of Planning and Development at Albany Housing Authority, said, "Thank you to the Preservation League of New York State for recognizing the role that the affordable housing community can play in the preservation and revitalization of what are often both our most treasured and at-risk neighborhoods. The Albany Housing Authority accepts this award with honor on behalf of our entire team of funders, project participants, and neighborhood stakeholders, whose support and hard work allow the Authority to be an able partner for those who wish to transform their future, and that of their community, into one of choice."

"As we launch our 40th Anniversary celebration in 2013, the Preservation League is looking forward to exploring not just the past, but the future of historic preservation. Many of the 2013 award winners provide valuable examples for other practitioners by incorporating energy efficiency techniques, adaptive reuse strategies and Federal and State Historic Rehabilitation Tax Credits," said DiLorenzo. "Each year, we are impressed by the number and variety of laudable nominations, and this year was no exception. We are delighted to celebrate the work of the Albany Housing Authority."