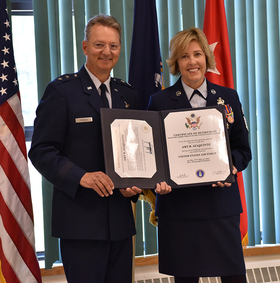 She became the senior enlisted leader for the New York National Guard in 2017.

As senior enlisted advisor for both the New York Army and Air National Guard, Giaquinto reported directly to Army Maj. Gen. Ray Shields, the Adjutant General of New York on all enlisted issues; to include professional military education, enlisted promotions, morale, and family and community relations.

She decided to retire, Giaquinto said, so she can spend more time with her family.

The position requires a great deal of travel and she has a son still in high school who she would like to spend more time with, she explained.

"It was a hard decision to make. I love serving and I will miss my National Guard family," Giaquinto said. "No one asked me to leave. It is just the right time."

He praised Giaquinto as a consummate professional who always provided good counsel and advice.

In her remarks, Giaquinto emphasized how much she enjoyed serving in the military and charged everybody present to always "leave the organization better than you found it."

She also emphasized the important role every individual who serves in the military plays.

"Each of us deserve respect for our service to this great nation," Giaquinto said.

Giaquinto's military service began in 1984 when she enlisted in the United States Army.

She left the Army after three years and after a ten year break in service she decided to join the New York Air National Guard's 109th Airlift Wing in 1997 as an information manager.

In retrospect, she wishes that she hadn't stayed away from the military for so long after leaving the Army, Giaquinto said.

"If I knew about the Guard sooner I would have joined right after leaving active duty," she said.

She served seven years in the logistics readiness squadron and also served on the Base Honor Guard. In 2004 Giaquinto was selected as the information resource manager in the communications flight. In 2006 Giaquinto was selected as the office manager for the wing command staff, administering executive support for the wing commander, vice commander and executive officer.

In 2009, Chief Giaquinto deployed to Afghanistan in Operation Enduring Freedom, and in 2010 she was selected as a human resource specialist at New York Air National Guard headquarters.

Giaquinto was selected as the 109th Airlift Wing command chief in June 2013 before moving into the New York Air National Guard Command Chief position in July 2016. She was the first women in both those positions.

She took over as senior enlisted leader for the New York National Guard in November 2017.

Since she joined the Army In 1984 she seen lots of changes in the military for women, Giaquinto said.

"There are more and more firsts for women in the military," she said. "The first women to serve in combat, the first woman to be in the position I am in."

"I hope there are a lot less firsts. I hope it becomes the norm," Giaquinto said.

Her advice to young people joining the military is to be ready to make a career out of it.

The National Guard, especially, has a lot to offer, she said. People can have a military career and a civilian career at the same time and get opportunities to deploy without moving around as much as active military people do.

"Twenty years goes by fast. My advice is if you can stay in and make it a career you will not regret it," she said.

Giaquinto is married to a fellow member of the New York Air National Guard, Chief Master Sgt. Mark Giaquinto, who will continue to serve.

They have two adult children: Alyssa Giaquinto, a Technical Sergeant in the Air National Guard, and Ashlyn Giaquinto. Her son Aidan Giaquinto, is a high school student.