Archeologist to Theorize on What Destroyed Mayan Civilization 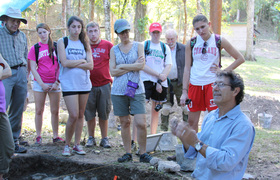 Jaime Awe, right, at Cahal Pech, an archeological research site in Belize where SUNY Cortland students were given a private lecture, followed by a visit to his laboratory featuring Mayan artifacts.

CORTLAND, NY (10/23/2013)(readMedia)-- As the ancient Mayan civilization slowly collapsed in Central America some thousand years ago, perhaps in the face of a quickly changing environment, its survivors retreated with their most precious artifacts into caves.

Jaime J. Awe, a noted archeologist in Belize, will discuss what the ancient treasure troves have revealed to researchers about a remarkable civilization, on Tuesday, Nov. 5, at SUNY Cortland.

Awe, who directs the Institute of Archaeology for the National Institute of Culture and History at Galen University in San Ignacio, Cayo, Belize, will lecture on "Cave Archaeology in Western Belize and its Implications for Understanding Ancient Maya Response to Environmental Change" at 4:30 p.m. in Brockway Hall Jacobus Lounge.

His lecture is free and open to the public.

Belize, a small Central American country with a scattered population roughly the size of Buffalo, N.Y., is a relatively untapped archeologist's goldmine. The rain forests have swallowed most artifacts of a once-thriving civilization, but the remnants of their wondrous cultural gatherings can be found in the shards of ceramic ware left behind.

Awe, an associate professor at Galen University, is a Belizean archaeologist with 22 years of field experience in Mayan archaeology.

He has taught at universities in Canada, England, and the United States and is currently also a faculty affiliate with the University of Montana in Missoula.

During the last 15 years, Awe has participated in the Belize Valley Archaeological Reconnaissance Project, which has conducted considerable scientific research in the caves of western Belize.

He directs the Western Belize Regional Cave Project, conducting intensive field research in several caves in western Belize and comparing the information gathered from this region with that recorded in other areas of the Mayan lowlands. He also currently is directing excavations at Cahal Pech, one of the oldest Mayan sites in western Belize.

Researchers know the Maya treated the caves as sacred places and ceremonial sites, he said.

"But who conducted these ceremonies, the nature of the rituals and the purpose they served are poorly understood," Awe said. "It is our hope that long-term regional study of caves can provide clues and answers to these very questions."

In addition to recording a wealth of information on ancient Maya cave rituals, these investigations have allowed modern humans to reconstruct an extensive climatic record for the region, Awe said.

Awe recently began collaborating with Jeremiah Donovan, a SUNY Cortland professor of art and art history who has specialized in ceramics, including research in China and Central America on recreating the lost methods used in pottery production by early civilizations.

Donovan and seven art and art history majors who have helped him with his study met Awe in January in Belize, during Donovan's pilot course, Winter Study: History, Culture, and the Arts. Donovan continued his research in Belize with several of the students this past summer. Awe's visit advances that collaboration.