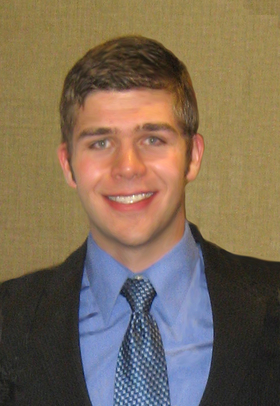 But it's not all fun and games for this senior physical education major, who has maintained a 3.63 grade point average during his two years at the College and will graduate in May. The National Association of Sports and Physical Education (NASPE) honored him as its Major of the Year in March for his excellent academic achievement, exemplary leadership and involvement, and demonstrative dedication to the fields of health, activity and fitness.

A promising scholar in his chosen field, Herwick delivered four presentations at two New York State Association of Health, Physical Education, Recreation and Dance (NYSAHPERD) conferences and recently was slated to give another for the national association.

"I think physical education is an elemental part of a child's education," Herwick says. "It's something that needs to be set up early so that it can be continued for life. Especially with the obesity epidemic, it's important that we get inside of schools and we teach students how to be confident in their abilities."

In March 2008, Tau Sigma, the academic honor society for transfer students, initiated Herwick, who attended Hudson Valley Community College (HVCC) before Cortland, as a member. A resident assistant on the campus, Herwick was recognized last spring with an Academic Excellence Award by the Residence Life and Housing Office.

Herwick serves as president of the Alliance of Physical Education Majors Club and the Cortland Table Tennis Club, participates on the Student Activities Board, and volunteers for Habitat for Humanity. He has offered his time and talent to several efforts on behalf of individuals with physical challenges.

This spring, he student-teaches at V.W. Becker, an elementary school in Ravina-Coeymans-Selkirk (N.Y.) School District, and Catskill High School. He'll continue his studies toward a graduate degree in adapted physical education.

"SUNY Cortland is one of the premiere, if not the premiere, New York state physical education schools and it definitely ranks among the top in the nation, if not the world," said Herwick, noting that he was inspired to transfer to SUNY Cortland by Thomas Rogan '66, a Cortland alumnus and his professor at HVCC. His mother, alumna Denise Sonustun Herwick '86, was another influence.

"I think the teachers are very diverse at Cortland and what makes the program so great is how the professors can bring so many different aspects to one profession."