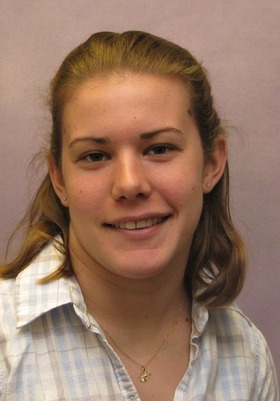 Selected by her teammates as assistant captain of the women's varsity ice hockey team in 2008-09 and 2009-10, Dippel takes pride on the rink, in the classroom and in the community.

"That was one of the things I really liked about Cortland: There was a good balance between academics and athletics," says Jeanna, who has maintained a 4.02 grade point average while earning laurels as a scholar-athlete from both the Eastern Collegiate Athletic Conference (ECAC) and the State University of New York Athletic Conference (SUNYAC). "Athletics is not just an afterthought, there's really a lot of attention paid to it. They make it just as important as academics. It's been a good experience."

In the classroom meanwhile, faculty members serve as her mentors.

"At SUNY Cortland, one of my main influences was (Professor of Biological Sciences) Peter Ducey," she said. "He taught me during my first semester here and he always motivated me to do my best and looked out for me."

Dippel was named to ECAC's West All-Academic Team in 2007-08 and 2008-09 and the SUNYAC named her to its Commissioners List for her academic accomplishments during the same years. The Athletics Program presented her with its 2007 and 2008 Excellence in Academics and Athletics.

A member of the Beta Beta Beta, the national honor society for biological sciences, and Phi Kappa Phi, the interdisciplinary honor society, she has made the President's List and Dean's List at SUNY Cortland. SUNY Cortland's Biological Sciences Department named her as its 2009 Outstanding Academic Achievement Among Senior Biology Majors.

Her varied and extensive list of service and social action in the community has earned her the College's 2009 Civic Engagement Leadership Award. She has taken special pride rolling to the rescue of classmates aboard the Emergency Squad van. She has responded to approximately 25 calls to take vital signs since the spring of her sophomore year.

A biology and kinesiology dual major, Dippel focused early on her career objectives.

"When I was in the ninth grade, I sprained my ACL," she explains. "I knew I wanted to go into healthcare and have focused on becoming a physician's assistant by reading about them and shadowing them. They deal with a wide range of problems and a wide range of people and it's just a fascinating area."

She served as a nurse's aide at the Cortland Regional Medical Center, which presented her with its 2008 Emergency Medicine Physician's Sponsored Scholarship.

Upon graduation in May, Dippel plans to make the next step to a master's degree in health science and national certification as a physician assistant.