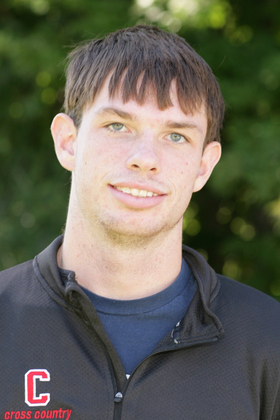 A 2010 "Renaissance man," Lusby is as much at home arguing his case in Moot Court as he is running cross-country or teaching martial arts.

Recently at an Eastern Regional Moot Court Competition of lawyer hopefuls in Fitchburg, Mass., he placed 24th individually out of 96 competitors.

Since he was 16 years old, he has instructed children and adults in Shaolin Kempo Karate with the Shaolin Self-Defense Centers.

The SUNYAC, noting both his academic and physical achievements, named him to its All Academic Team for cross-country in 2006 and 2007, indoor track in 2008 and outdoor track in 2007 and 2008. He competed on SUNY Cortland's cross-country team that captured the 2008 National Collegiate Athletic Association (NCAA) Div. III national championship.

"I love this school," he said. "I wasn't so sure coming here what I wanted to do, but Cortland had so many different opportunities. I arrived here wanting to become a history teacher and I am a dual history and political science major. I think being here, and the faculty here, especially the Political Science Department faculty, has been great.

Bound for Georgetown University in Washington, D.C., to study for a law degree this fall, Lusby has maintained a 3.82 grade point average at SUNY Cortland.

Outside the classroom, Lusby completed an internship with a SUNY Cortland graduate, the Hon. Judge Robert C. Mulvey '80 of the New York Supreme Court in Tompkins County, Ithaca, N.Y.

"This gave me a real hands-on experience," Lusby said. "Judge Mulvey let me read a lot of current cases he was working on and this gave me a feel for the kind of work real lawyers do. He was great. He always let me sit in on lawyer's meetings and court proceedings."

McGuire has submitted his research paper produced during his internship experience for presentation this month at the New York State Political Science Association's annual meeting in Saratoga Springs, N.Y.

Lusby has volunteered as a student justice on the College's Judicial Review Board, the non-academic discipline-adjudicating panel.

"Keith is always respectful of our student respondents regardless of the nature of their offense," observes Christopher Latimer, an assistant professor of political science and the Political Science Department's pre-law advisor. "He believes that everyone deserves a fair chance and is able to provide a voice for those who are in need of help."

Lusby gave his time and energy to Habitat for Humanity repairing homes for low-income families following a flood in Binghamton, N.Y. A member of three national honor societies, he has made the Dean's List every semester he has attended SUNY Cortland and the President's List in Fall 2009.

"I think running cross-country and track for two-and-a-half-years helped keep me disciplined by forcing me to stay on schedule," Lusby said. "It was a release from studying and was one of the most beneficial things I did while I was here."