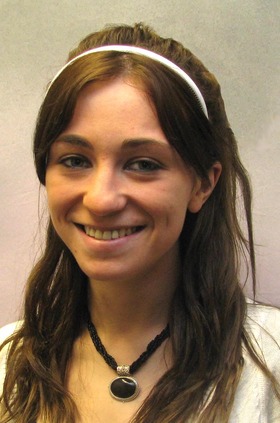 Santoro was an uninspired student through most of high school, but you wouldn't know that today. With two congressional office internships under her belt, one inside Washington, D.C., and the other in an upstate New York district office, this May graduate with a 4.02 grade point average can give an impressive presentation on the workings of the House of Representatives.

The recipient of the College's William B. Rogers Award for the top grade point average in political science, Santoro will present her research findings at the New York State Political Science Association annual meeting.

"I think that my highest honor would be my internship experience because it's enabled me to have a greater understanding in the arena of political science," says Santoro, whose academic achievements have placed her on the President's List and led to her induction into three honor societies. "I don't think I would have been able to do all my presentations if I hadn't had the internship experience. I've been able to work for really educated and intelligent people who have helped me so much. I just couldn't have learned it in the classroom."

Santoro was turned onto politics in her high school junior year by her American history teacher.

"Learning is empowering," she said. "It makes you a better person because you understand more things and you have a firmer grasp on everything."

Still lacking confidence in her ability to pursue political science, she embarked at SUNY Cortland as a secondary education: history major.

"I think the Political Science Department here is just incredible," Santoro said. "There couldn't have been better, more helpful professors. I really just can't say enough about how impressive they are, how willing they are to help and teach and how much I've learned from being a political science major here."

In Summer 2008 she interned for two months in the Washington, D.C., office of her hometown congresswoman, Carolyn McCarthy. Last semester, she sampled district office duties during a second internship with Congressman Michael Arcuri in Cortland.

"I gained a lot of knowledge about the way things work in Washington, D.C., as opposed to how they work in the district office," said Santoro, who has shared her newfound knowledge about Congress in presentations on the Constitutional Convention origins.

At SUNY Cortland's Scholars' Day on April 16, she will lecture on "The Attenuation of Constitutional Principles and the Terrorist Threat: The Case of the Bush Administration's Terrorist Surveillance Program."

She continues to intern with Arcuri's office while she considers her next career move.

"I really do like the communication and public relations side of politics," said Santoro, who has also volunteered with Habitat for Humanity, as a peer counselor and tutor and with Mercy for Animals in advancing animal rights. "While I'm younger, I lean toward working in politics. But when I'm older, if I could be in an academic career, such as an adjunct professor, I would like that."