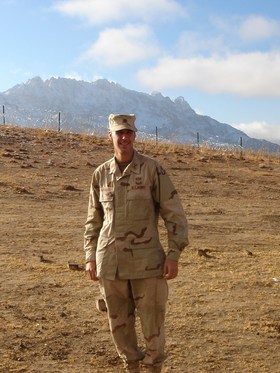 WHAT: Change of Command Ceremony to formally recognize the transfer of authority from one commander to another.

WHO: Incoming commander Maj. Robert Giordano receives the colors and responsibilities of command from outgoing commander Lt. Col. Michael McGurty in front of about 50 Soldiers of the 106th Regional Training Institute.

There will be an opportunity to interview both Maj. Giordano and Lt. Col. McGurty about their military careers and the role 106th Regional Training Institute. Video opportunities include the transfer of the commands flag from the outgoing to the incoming commander and troops in formation.

Members of the media wishing to cover the ceremony must contact Staff Sgt. Justin Perez, 914-788-741,8 in order to gain access to this secure military facility.

The Change of Command Ceremony dates back to the days in which a military unit's flag marked its position in the line of battle. The colors were always near the commander, so troops knew where to rally on the battlefield. Today the transfer of the colors marks a change in the unit and givens the soldiers their first opportunity to see and hear their new leader.

The change of command ceremony recognizes the accomplishments of the outgoing commander and the soldiers who served under him. In addition, the ceremony identifies the new commander to the Soldiers, so they can follow him on the field of battle.

Michael McGurty of Montgomery, N.Y., received his commission as an infantry second lieutenant in 1987 and is a 1988 graduate of the State University of New York at Buffalo.

Prior to his command of the 1st Battalion, 106th RTI, he served as an operations officer and mentor to the Afghan National Army in 2008 and as an embedded team chief with the 3rd Kandak of the Afghan Army in 2005-2006.

He is a graduate of the Army Airborne and Air Assault schools.

Robert Giordano, from Rexford, N.Y., enlisted in the New York Army Natoinal Guard in 1983 and received his commission as a second lieutenant upon graduation from the Rochester Institiuat of Technology in 1989.

Giordano will receive his promotion to the rank of Lt. Col. prior to the change of command ceremony. Col. Natali will pin his new rank on him.