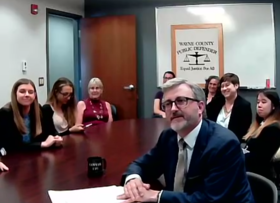 ALBANY, NY (08/11/2021) (readMedia)-- Arline L. Hanna received the 2021 Kevin M. Andersen Memorial Award during the Annual Conference of the New York State Defenders Association (NYSDA), held online due to COVID-19. Wayne County Public Defender Andrew D. Correia nominated Hanna, who is the Second Assistant Public Defender in his office. "Her quiet, consistent compassion, dedication and thorough preparation have made her a rock in the office for lawyers, staff and for our clients," Correia wrote. He described her litigation skills, advocacy outside the office in positions such as Vice-President of the board of the local pre-trial release agency, and training of other lawyers about new laws and best practices, and ability to get clients to trust her when difficult decisions had to be made. And in her supervisory position, she is a teammate and resource for others in the office, he said, "able to lead the newer lawyers, while teaching the older dogs new tricks." Correia noted that Hanna balances all that, and her responsibilities outside of her career, "with a steely determination mixed with self-effacing humor that breeds loyalty and a positive culture in the office."

Presenting the award virtually was Jerry Ader, head of the Genesee County Public Defender's Office, which created the Kevin M. Andersen Memorial Award. The award "is presented to an attorney who has been in practice less than fifteen years, practices in the area of indigent defense, and exemplifies the sense of justice, determination, and compassion" that were the hallmarks of its namesake. In nominating Hanna for the award, Correia noted that "[i]t is vital that we recognize the newer lawyers who have taken over mid-level supervisory positions in offices as we all add to our staffs over time."