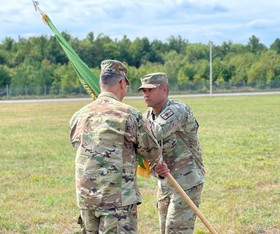 Quintana, who enlisted in the Army as an armor crewman in 1997, replaces Lt. Col. Monique Foster who has led the battalion since 2019.

Foster is retiring after a military career which began when she graduated from the United States Coast Guard Academy in 1984.

Colonel Jamie Barcomb, the commander of the 153rd Troop Command oversaw the traditional change of command ceremony between Quintana and Foster.

The battalion's flag, or colors, was transferred from Foster to Quintana, signifying the change of command.

The 102nd Military Police Battalion was created in 2009 and has participated in a variety of state and federal missions, to include responding to Hurricanes Irene and Lee, the COVID-19 Pandemic and providing security for the 2021 Presidential Inauguration.

Quintana, who lives in Alexandria, Virginia, joined the New York Army National Guard as an enlisted Soldier in 2001.

He was part of the New York National Guard response to the 9/11 attacks on the World Trade Center and in 2002 he was deployed to the Canadian border to assist in a border security mission on as part of Operation Noble Eagle.

He then served full-time as a member of the New York National Guard's Counterdrug Taskforce, working as a financial crime analyst in Manhattan in support of the New York High Intensity Drug Trafficking Area and a Contraband Enforcement Team mission at John F. Kennedy International Airport.

Quintana attended Offficer Candidate School and was commissioner as a military police officer.

He deployed to Afghanistan in 2012 as the operations officer for the 101st Expeditionary Signal Battalion.

Quintana is employed by the U.S. Department of Health and Human Services in Washington D.C where he oversees the agency's Physical Security Team.