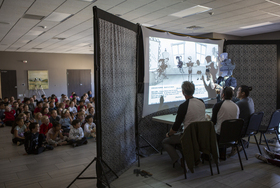 Dr. Jared White, assistant professor of Spanish, joined Dr. Jason Yancey, associate professor of Spanish at Grand Valley State University in Michigan, in leading performances aimed at broadening understanding of history and culture in 16th and 17th century Spain, during a period often referred to as the "Siglo do Oro," or the "Golden Age."

In 2018, Dr. White and Dr. Yancey collaborated with two other professors, Dr. Jonathan Wade, of Meredith College in Raleigh, N.C., and Dr. Esther Fernandez from Rice University in Houston, Texas, to form the puppetry troupe, "Dragoncillo." Together, they performed in El Paso, Texas, earlier this spring.

In this show, students took their positions behind a portable stage set off with a white curtain as they dove into characters' voices and hand movements for intricate puppets Yancey created. Shows like this were called "entremeses" – or one-act plays – often shown between acts in Spanish theatre from that period.

"Entremes are meant to be funny," White said as he implored children to help him design the pieces of a puppet. "And if you can imagine something, you can do it in a shadow puppet."

Following a pair of short performances, White and Yancey joined the cast in answering questions from young students. White said he hoped the session would shed light on Spain while giving students insight into humor, culture, and the arts.

"I enjoyed making silly voices," said BVU's Cole Hackbarth, a Spanish and theatre media performance double major from Spirit Lake. "Being a part of this show was a chance for me to practice as I someday want to be a voice actor. This was so much fun."

"I like that the kids loved it," said Skylar Finch, a Spanish and arts management/theatre double major from Polk City. "It was so interesting to learn about and then participate in a different aspect of the theatre."

Since 1891, Buena Vista University has prepared students for lifelong success and blends liberal arts with real-world applications. Our traditional campus on the shores of Storm Lake hosts students in a variety of majors and pre-professional programs, including elementary, secondary, and special education; business and accounting; and biological and chemical sciences. Our 16 degree-completion locations, online, and graduate programs expand student potential with a pace and academic rigor designed for working adults and a variety of class formats that make scheduling even more convenient. With an average scholarship of more than 50 percent off of tuition, BVU is an affordable option for all students. Visit www.bvu.edu.