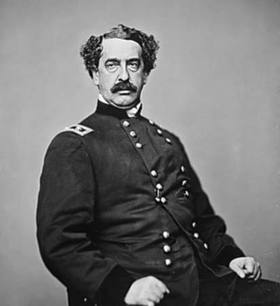 But Doubleday, a professional Soldier, was second in command of Fort Sumter, South Carolina when the shots that started the Civil War rang out on April 12, 1861 and did fire the first United States Army shot in the war.

Doubleday fired the first cannon that responded to the 43-cannon bombardment launched by Confederate and South Carolina forces under the command of Brig. Gen. Pierre Gustave Toutant Beauregard at 4:40 a.m. that morning. Doubleday touched off the first reply by the United States Army at 7 p.m.

Doubleday, who graduated from West Point in 1842 had served in the Mexican War of 1846-1848, and then fought Seminole Indians in Florida from 1856 to 1858. In 1858 he was assigned to Fort Moultrie in Charleston South Carolina.

Following South Carolina's vote to leave the Union in December 1861, Doubleday's newly assigned commander, Major Robert Anderson, decided that Fort Moultrie-located on the mainland-was indefensible. He and Doubleday moved the Fort Moultrie garrison-all 80 Soldiers-- to Fort Sumter, a fort under construction in an Island in Charleston Harbor on December 26.

On April 10 the Confederates, afraid that Fort Sumter would be resupplied by the United States Government , demanded that Anderson surrender the fort. Anderson responded that he would have to abandon Fort Sumter on April 15 unless he was supplied. That response wasn't good enough, and the Confederates launched their attack.

The Union troops on Fort Sumter, helped by 43 loyal civilian workmen, fired back but their response was ineffectual. Union supply ships were kept from reaching Fort Sumter because of the artillery bombardment.

Finally, after 34-hours of cannon fire, Anderson and Doubleday agreed to surrender. The Confederates agreed to allow the garrison to fire a salute to the United States – in which one man was killed when a stray spark ignited gunpowder and caused an explosion-and the garrison surrendered. The Civil War had begun.

Abner Doubleday went on to become a Major General of Volunteers and a division commander in the Union's Army of the Potomac . On the first day of the Battle of Gettysburg, Doubleday took over the 1st Corps of the Army of the Potomac when its commander was killed. His 9,500 men held back 16,000 Confederate troops, allowing the Union forces to seize the high ground east of the town.

After the Civil War, Doubleday remained in the Army as lieutenant colonel, commanding the all-black 24th Infantry Regiment in Texas before retiring. He also went on to patent a design for the San Francisco cable cars and went into business.

He died in 1893. He never claimed to have invented baseball in Cooperstown.

That mythic story came from somebody else. In 1839, historians point out, Doubleday was a cadet at West Point and his family had moved out of town.

More than 500,000 New Yorkers served in the Army and Navy during the four years of the Civil War and 53,114 New Yorkers died. Throughout the period of the Civil War Sesquicentennial observance, the New York State Division of Military and Naval Affairs will be producing short articles about New York's Civil War experience researched by the New York State Military Museum in Saratoga Springs.