Battlefield intelligence by the NY National Guard's 27th Division is subject of free talk on Feb. 1

Talk on the Battle of Saipan kicks off the Museum's winter and spring 2020 series of free presentations. 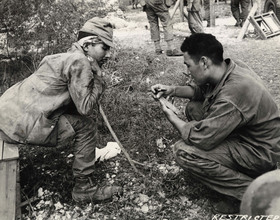 An interpreter with the 27th Infantry Division (right) questions a captured Japanese soldier during the Battle of Saipan.

SARATOGA SPRINGS (01/27/2020) (readMedia)-- The successes and failures of the intelligence work done by New York National Guard's 27th Infantry Division during the 1944 Battle of Saipan will be the subject of a free talk at the New York State Military Museum in Saratoga Springs on Saturday, Feb. 1.

The talk starts at 2 p.m. in the museum's public room.

The 27th Infantry Division and the Marine Corps 2nd and 4th Divisions invaded the island on June 15, 1944 and finally defeated the Japanese 43rd Division on July 9, 1944.

On July 7 the 27th Division fought a 15 hour battle against the largest Japanese "banzai" attack of World War II in which four members of the division received the Medal of Honor posthumously. But the battle was marked by controversy when the Marine Corps commander, Lt. General Holland "Howling Mad" Smith, relived the 27th Infantry Division commander, Major General Harry Smith.

Dr. Andrew Tompkins, a history professor at Manhattan College will outline how the intelligence section of the 27th Infantry Division prepared for the battle and what they did well and not so well during the fight.

Tompkins talk is based on books about the battle and military after action reports. Tompkins will note the lessons learned in the battle which were incorporated in to later operations in the Pacific.

Dr. Andrew Tompkins is a historian of World War II-era American intelligence and diplomacy. He received his Ph.D. from Drew University in Madison, New Jersey in 2018, where he studied Franco-American relations during the Vichy era. Dr. Tompkins presently serves as adjunct instructor at Manhattan College in Riverdale, New York, where he has taught, among other courses, a survey of American intelligence history.

Other talks in the series will focus on:

And the 42nd Infantry Division's battle during World War II and the liberation of Dachau on March 21.