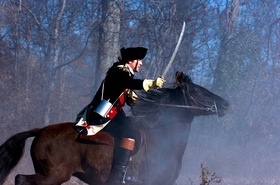 SARATOGA SPRINGS, NY (05/13/2022) (readMedia)-- Two Saratoga County men who wrote and produced a movie about Benedict Arnold, will screen portions of their film and discuss Arnold's role in the Battle of Saratoga during a free presentation at 7 p.m. Thursday, May 26 at the New York State Military Museum in Saratoga Springs.

Filmmakers Tom Mercer and Anthony Vertucci will show the Battles of Saratoga scenes from their documentary, Benedict Arnold: Hero Betrayed, and discuss the history involved

They will talk about Arnold's actions on the two battles that are collectively known as the Battle of Saratoga: The Battle of Freeman's Farm on September 19, 1777, and the Battle of Bemis Heights on October 7, 1777.

The fighting at Saratoga and the surrender of the British Army is considered by historians to be a turning point in the American Revolution.

Mercer and Vertucci, the film's writers and producers, will also share stories from behind the scenes about the making of their docudrama and take questions from the audience.

The two-hour film, narrated by Martin Sheen, had its premier in early November at Universal Preservation Hall in Saratoga Springs, and is available for rent or purchase on most major streaming services.

Arnold was a Connecticut-born merchant mariner-turned-soldier who risked his life and fortune for the American cause of independence and fought in some of the most significant battles of the Revolutionary War before switching sides and attempting to turn over the Continental Army's fortifications at West Point to the British in September 1780.

The film, a production of Talon Films, Inc., is based on "Benedict Arnold, Revolutionary Hero, An American Warrior Reconsidered," the 1997 biography by James Kirby Martin, who served as executive producer and chief historian and provided commentary along with a dozen other prominent historians.

Mercer grew up in Saratoga Springs and lives in Colonie. Vertucci grew up in Fort Johnson and lives in Middle Grove. The film was directed and edited by Schenectady native Chris Stearns.

Ninety percent of the cast members were from upstate New York, where most of the filming occurred in such places as Albany, Schenectady, the Saratoga Battlefield, Lake Champlain and the Mohawk Valley, as well as Connecticut, New Jersey, Quebec and the United Kingdom.

More information on the film can be found on its website: https://www.benedictarnoldherobetrayed.com .

For questions about the film contact Chris Carola at Email: ccarola@nycap.rr.com or phone: 518-316-0840