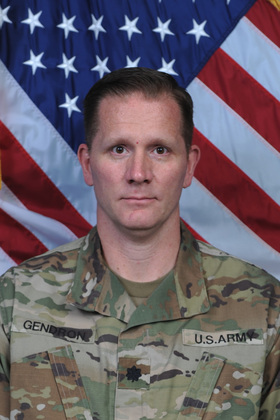 BINGHAMTON, NY (06/25/2020) (readMedia)-- The New York Army National Guard's 204th Engineer Battalion, which is headquartered in Binghamton, will change commanders during a ceremony on Saturday, June 27.

Lt. Col. Brandon Gendron will replace Lt. Col. Wing Yu who has commanded the battalion since 2017. Members of the press are invited to cover the change of command, which will be modified to comply with social distancing rules.

WHAT: A traditional military change-of-command in which the battalion flag, or colors, is transferred from the outgoing to the incoming commander. Since the colors followed the unit commander into battle the ceremony allowed the unit Soldiers to see who would lead them.

The ceremony will be modified with fewer people present and with only one person representing each of the battalion's companies instead of the traditional formation of massed units.

The battalion has elements in Horseheads, Walton, Camp Smith Training Site near Peekskill, Kingston, and Buffalo. It is one of two engineer battalions in the New York Army National Guard.

Interviews with the incoming and outgoing commander and video and still imagery of the ceremony.

Reporters seeking to cover the ceremony must contact Major Kevin O'Reilly at 607-763-3104 for access to this secure military facility. Because of COVID-19 precautions members of the press must be prepared to answer health questions and have their temperature taken to access the building.

Gendron, a resident of Simsbury, Connecticut was commissioned as an Engineer Officer in June 2004.

He is a graduate of the Army Command and General Staff College and the State University of New York at Buffalo. He also holds a Masters Degree in Business Administration from Nichols College.

Gendron and his wife Suzanne have an 8-year old daughter, Kyleigh, and a 3-year old son, Jack.

Yu is a full-time National Guard officer and a veteran of the Afghan War and served as an enlisted Soldier after joining the New York Army National Guard in 1987. He was commissioned in 1994.

His next assignment is to serve as the executive officer for the 153rd Troop command.

Yu has served in a number of leadership positions and has deployed to Kuwait as well as Afghanistan. From 2016 to 2017 he was assigned as liaison to the 10th Mountain Division at Fort Drum to stand up a new National Guard element-the Main Command Post Operational Detachment – which provides Guard and Reserve Soldiers to fill out positions in the division headquarters.

Yu holds a degree in Avionics from Vaugh College of Aeronautics and Technology, a Bachelor's Degree in Electrical Engineering and a Master's Degree in Environmental Technology from the New York Institute of Technology. He is a graduate of the Army Command and General Staff College.