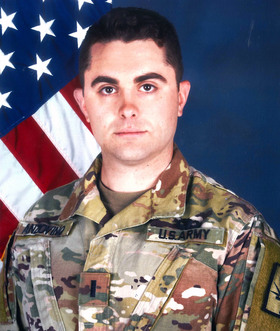 LATHAM, NY (01/10/2020) (readMedia)-- The Forward Support Company of the Binghamton's 204th Engineer Company gets a new commander during a ceremony being held on Sunday, Jan. 12 at 2 p.m. at the Binghamton Armory.

1st Lt. Timothy Anzovino, a Queensbury resident, will replace Capt. Brett White, a Harriman resident, as the company commander. Members of press are invited to attend the ceremony.

WHAT: A traditional military change of command in which the guidon, or flag, of the Forward Support Company will be transferred from White, the outgoing commander; to Anzovino, the incoming commander; by Lt. Col. Wing Yu the battalion commander.

Traditionally the unit flag indicated the location of the commander on the battlefield. The traditional ceremony allowed the unit's soldiers to see who they were to follow into battle.

Reporters can get still and video imagery of the change of command ceremony, with troops in formation and the guidon transfer. There will also be opportunities to speak to the incoming and outgoing commanders.

Reporters must call 1st Lieutenant Benjamin Massarini at 315-406-0635 for access to this secure military facility.

1 Lieutenant Timothy Anzovino commissioned as a 2nd Lieutenant in May of 2012 through the Lehigh University Army ROTC program.

Anzovino originally served as an Ordnance Officer in the Pennsylvania National Guard. His first assignment was as Maintenance Control Officer in F Company 3rd Battalion 103 Armor in Lock Haven, PA. He also served as Executive Officer, for F Company. In January 2013, he was activated in support of the Presidential Inauguration, serving as the Maintenance officer in charge for the mission.

In 2016, Anzovino transferred from Pennsylvania to the New York National Guard and was assigned to the Forward Support Company of the 204th Engineer Battalion in Binghamton, NY as a Maintenance Control Officer and later Executive Officer.

Following Hurricane Maria in 2017, Anzovino was activated to provide support to the Island of Puerto Rico. He served as the Maintenance Control Officer and officer in charge for the maintenance section at Camp Santiago.

He is a graduate of DeSales University with a Bachelor's degree in Communications and Public Relations.

In his civilian life, Anzovino works as a Trainmaster for PanAm Railways, where his duties include overseeing daily railroad interchanges and managing train crews across New York, Vermont, and Massachusetts.

Anzovino is married to Laura Quaresima who works as a Registered Nurse at Glens Falls Hospital in Glens Falls, N.Y. The two reside in Queensbury, NY.

White has served as the commander of the 204th Engineer Battalion Forward Support Company since 2016. His new assignment will be to the 53rd Digital Liaison Detachment in New York City as a logistics officer.

White holds a Bachelors in History and Studies in War and Peace and a Masters in Military History from Norwich University.

He and his wife Rebecca live in Harriman, N.Y.

The Forward Support Company provides direct logistical support to the other Companies within the battalion; ensuring Soldiers are fed, materials are transported, and equipment is fixed and fueled in a timely manner. Within the 204th Engineer Battalion, the FSC is tasked with supporting multiple Engineer Units so they are able to complete various construction projects.