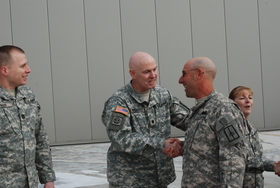 BINGHAMTON NY (02/18/2011)(readMedia)-- The New York Army National Guard's 204th Engineer Battalion, which is headquartered at the New York State Armory on West End Avenue here, will get a new commander on March 6.

Lt. Col. James Freehart, a veteran of Afghanistan and the battalion's response to the 2006 floods, will take command of the battalion. He replaces Major Andrew Hutz who has been serving as commander.

Freehart , a resident of Troy, works as an environmental technician at the New York State Division of Military and Naval Affairs in Latham .

The battalion headquarters company and forward support companies are based at the Binghamton Armory. The battalion has subordinate companies in Kingston in the Hudson Valley, Walton, Horseheads and Buffalo.

The 827th Engineer Company, based in Horseheads and Walton just returned from a year long mobilization and deployment to Afghanistan. That company specializes in repairing roads.

The 152nd Engineer Company in Buffalo is specially trained in the skills needed to rescue victims from a destroyed building, along with basic combat engineer tasks.

The 1156th Engineer Company in the Hudson Valley specializes in vertical engineering; the construction of buildings and other basic facilities.

Freehart, who has served in the Active Army and Army National Guard served in Afghanistan as a member of the Training Advisory Group, training the Afghan National Army in 2008. In 1983 he was part of Operation Urgent Fury, the United States invasion of the Caribbean Island of Granada.

Freehart enlisted in the United States Army in 1981 as a helicopter repair technician and served on active duty with the 82nd Airborne Division and in Korea before leaving the Active Army in 1987. He enlisted in the New York Army National Guard after leaving active duty and was commissioned as a second lieutenant in Infantry in 1989 after completing the Officer Candidate School of the Empire State Military Academy.

As operations officer for the 204th Engineers, Freehart deployed to Germany for training exercises and responded to flooding in the Southern Tier in 2006.