Bronx woman chosen as St. Bonaventure University student speaker for the Class of 2013

Christel Mendez, a BBA candidate, is a graduate of Hostos-Lincoln Academy of Science 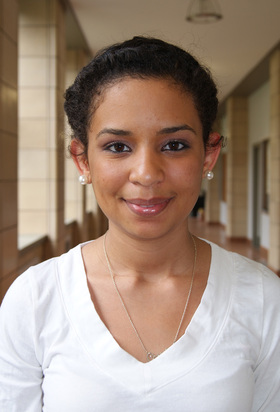 Christel Mendez of Bronx, N.Y., was selected as the student speaker for the Class of 2013 at St. Bonaventure University.

ST. BONAVENTURE, NY (05/09/2013)(readMedia)-- St. Bonaventure University senior Christel Mendez is still several days away from holding her diploma in hand, but she's already thinking about 2018 - her five-year class reunion as an alumna.

The BBA candidate who is majoring in management will address her classmates and guests as the student speaker during the university's 153rd Commencement Exercises Sunday, May 12.

Mendez plans to focus her speech on the undergraduates' journey from orientation as a new student "until where we are now, and what things could be like when we come back for Reunion."

Looking ahead hasn't always come easy for the young woman from the Bronx, but her decision to attend the small Franciscan university instead of one of the larger Catholic institutions located in the cityscape of NYC was a simple one.

The open spaces and friendly personalities that welcomed Mendez during a St. Bonaventure campus tour won her over. "I chose to experience something different than I was used to," she said.

That curiosity and positive attitude became Mendez's signature throughout her four years at St. Bonaventure, say faculty and staff who know her well.

Dr. Carol Wittmeyer, associate professor of management in the university's School of Business and Mendez's academic adviser, describes her as "an extraordinary student" who was always open to learning from her peers, her professors and her internship supervisors.

"She showed up to each and every class always with a smile, sitting in the front row ready to go. I enjoyed walking to class knowing that her contagious smile was the first thing I was going to see when I entered the room," said Wittmeyer.

That openness did not come naturally to Mendez, she says, and she had to push herself to overcome shyness and force herself to use English instead of her native language (Spanish).

As a student in the university's Arthur O. Eve Higher Education Opportunity Program, Mendez attended a five-week program that provided academic and social orientation to life at St. Bonaventure during the summer prior to her freshman year. Mendez would "hide in class," hoping to likewise hide her imperfect English.

It was also a time that she began to take the advice of HEOP Director Margaret T. Bryner to heart.

By the second semester of her freshman year, she had begun asserting herself into situations that forced her to use and improve her language skills, such as providing campus tours to prospective underclassmen as a Student Ambassador.

Her other campus involvement included membership in LASO (Latino American Student Organization), serving as business development director for the campus radio station, and serving as an officer in the Management Club. She also completed an internship at the Cattaraugus Region Community Foundation.

HEOP is a program for students with academic and financial needs, and students admitted into the program are provided with academic support services.

Growing up in the Dominican Republic, Mendez spent a lot of time at her dad's business, where she would enjoy hanging out at the office. After graduation, she plans to pursue a career in human resources - but first she's headed to Shanghai and Beijing for two weeks with Bonaventure's China Studies program to learn about Chinese culture, history and business.

Mendez, Wittmeyer said, is a student who really understood that the journey is as important - or more - than the destination.

"She made the best of every day at SBU, took advantage of every opportunity she had, and she treated every person around her with the utmost respect and curiosity to learn from them," Wittmeyer said. "She understands that every day is a gift. That attitude is contagious to all of us around her."

Mendez is a daughter of Joselina Mendez of Bronx, N.Y., and Santiago Cabrera of the Dominican Republic. She is a graduate of Hostos-Lincoln Academy of Science in the Bronx.

Commencement Exercises begin at 10:30 a.m. Sunday, May 12, in the Reilly Center Arena. For a schedule of Commencement activities, visit www.sbu.edu/Commencement.