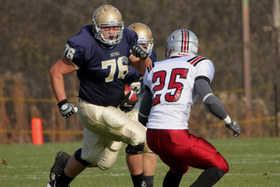 SAINT PAUL, MN (05/07/2012)(readMedia)-- At the conclusion of the 2012 NFL Draft, the Minnesota Vikings invited former Bethel University offensive lineman Mitch Elliott (Brooklyn Park, Minn.) as an undrafted rookie to the Vikings rookie minicamp. Elliot, a standout tackle for the Royals, was a D3football.com All-American as well as a three-time MIAC All-Conference First Team player. According to D3football.com, Elliott is one of 10 NCAA Division III players to be picked up by an NFL team.

Elliott, who participated in the Division III Senior Classic on Dec. 9 in Salem, Va., has been through a grueling process to get to this position. On March 3, Elliott took part in a 240-person NFL regional combine that was hosted at the Chicago Bears facility in Lake Forest, Ill. Two days later, Elliot was invited to participate in the NFL Pro-Day on the University of Minnesota campus. The try out began with 120 players, but was narrowed down to 40 players following the 40-yard dash, vertical testing, and strength training challenge. Of the final 40 players asked to work out with professional teams, half were University of Minnesota players. Elliott was just one of two players asked to work out with five NFL teams, including the New England Patriots, Jacksonville Jaguars, Green Bay Packers, Minnesota Vikings, and San Francisco 49ers.

Before the 2012 NFL Draft began, the Minnesota Vikings organization contacted Elliott to let him know that he would be given the opportunity to come to the team's rookie camp, should he go undrafted. In addition to the Vikings, the Chicago Bears and Kansas City Chiefs also expressed the same interest. This means Elliott can attend the Vikings rookie minicamp as well as the rookie camps for the Bears and Chiefs. However, it also means he could be cut during any of the camps.

The Brooklyn Park native was a four-year starter for the Bethel University football team. His extensive time on the offensive line helped the Royals continue to be among the best rushing programs in the nation (280 yards-per-game), and also helped the passing game by allowing the least sacks (nine) and best passing efficiency in the conference.

This is the Royal's second player in program history to be invited to participate with an NFL organization. Matt Eller, a former player in the early 1990s, played with the Minnesota Vikings and the Green Bay Packers.

Bethel University is a leader in Christ-centered higher education with approximately 6,600 students from 48 states and 25 countries enrolled in undergraduate, graduate, seminary, and adult education programs. Based in St. Paul, Minn., with additional seminary locations on both coasts, Bethel offers rigorous bachelor's and advanced degrees in nearly 100 relevant fields. For further information on Bethel University, go to www.bethel.edu.