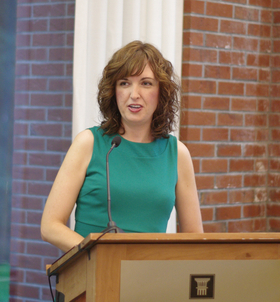 SARATOGA SPRINGS, NY (07/24/2019) (readMedia)-- For being a top-flight criminal defense attorney and much more, Rebecca Town received statewide recognition on Monday night. A Staff Attorney in the Criminal Defense Unit of the Legal Aid Bureau of Buffalo, Inc., Town was awarded the 2019 Kevin M. Andersen Memorial Award by the Genesee County Public Defender Office during the Annual Conference of the New York State Defenders Association (NYSDA).

"Rebecca is an extraordinary young lawyer," wrote Kevin M. Stadelmaier, the Chief Attorney of the Criminal Defense Unit, in nominating Town for the award. In addition to her work representing clients directly, Town has taken on with enthusiasm the training and mentoring of new attorneys needed as the office increases staffing pursuant to increased state funding meant to improve the quality of public defense services. She is active in the community; with the support of her office, she "has been at the forefront of efforts to educate the marginalized populations of the City of Buffalo on their rights and obligations in dealing with police," Stadelmaier noted. He added, "She has made it her business to connect with community leaders and residents alike to hear their concerns and communicate them to Bureau management, community stakeholders and government leaders."

Town has also been involved statewide on bail reform, marijuana legalization, and other issues, Stadelmaier said, with her office's support. Town has served on statewide panels and worked with local, state, and federal elected officials. She worked with the Vera Institute and Buffalo's Partnership for Public Good to facilitate "a yearlong published study showing the wide racial and ethnic disparities in the use of bail," which was used in lobbying efforts. Information on the historic criminal justice reforms passed in this year's legislative session, including bail and discovery reform, can be found in the recent issue of NYSDA's newsletter, the Public Defense Backup Center REPORT.

Stadelmaier called Town "a credit to this office and a tremendous resource for our clients." Referring to the lawyer for whom the award is named, Stadelmaier said that Town is a lawyer that "Mr. Andersen himself would have been proud to know."

The Kevin M. Andersen Memorial Award "is presented to an attorney who has been in practice less than fifteen years, practices in the area of indigent defense, and exemplifies the sense of justice, determination, and compassion" that were the hallmarks of its namesake. Kevin M. Andersen was a lifelong public defender known for his anger at injustice, his will to fight ferociously for his clients, and the compassion to grant clients "the dignity each deserved as a human being despite whatever human frailties they might present." The award was created by the Genesee County Public Defender Office.