Hotel @ Lafayette to be recognized in May 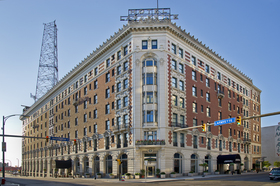 The Lafayette. Photo by James Cavanaugh.

ALBANY, NY (04/24/2013)(readMedia)-- The Preservation League of New York State has selected the Hotel @ The Lafayette in Buffalo to receive an award for Excellence in Historic Preservation.

"This project has transformed a landmark building in downtown Buffalo from a neglected shadow of its former self to a bustling hub of residential, commercial and hospitality activity," said Jay DiLorenzo, president of the Preservation League. "First designed and then expanded by Louise Blanchard Bethune, the first woman admitted to the American Institute of Architects, the Hotel Lafayette began as an opulent French-Renaissance style hotel. After being remodeled in the mid-20th century, the Hotel Lafayette fell into disuse and disrepair in the 1980s. Now, thanks to the business savvy of developer Rocco Termini and to the incentives afforded by State and Federal rehabilitation tax credits, the Hotel has been reborn."

This is the fourth project Carmina Wood Morris PC and Rocco Termini of Signature Development have tackled together, bringing back to life the original luster and luxury of Bethune's turn-of-the-century hotel. Through their careful and dedicated restoration, the entire story of the Hotel's evolution has been represented. One of the most visible buildings in downtown Buffalo has been restored to a vibrant hub of activity.

According to Jonathan Morris of Carmina Wood Morris P.C, "This has been a tremendous journey of discovery for us, peeling back and uncovering the story of Bethune's Hotel Lafayette, revealing and preserving the evidence of the building's transformation over time. We hope that our work has resulted in that story being evident for a whole new generation of visitors and patrons."

"As we launch our 40th Anniversary celebration in 2013, the Preservation League is looking forward to exploring not just the past, but the future of historic preservation. Many of the 2013 award winners provide valuable examples for other practitioners by incorporating energy efficiency techniques, adaptive reuse strategies and Federal and State Historic Rehabilitation Tax Credits," said DiLorenzo. "Each year, we are impressed by the number and variety of laudable nominations, and this year was no exception. We are delighted to celebrate the renovation of the Hotel @ The Lafayette and to commend Signature Development for their stewardship."