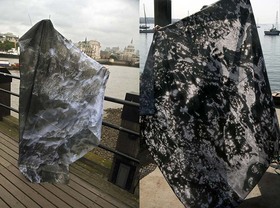 The exhibition will open with a reception on Nov. 7 from 5 to 9 p.m. The artists will give a talk in the museum during the reception at 6 p.m. Their performance will be presented in conjunction with the 2014 Other Words Conference, organized by the Florida Literary Arts Coalition.

may be the most imaginary

These two lines are excerpted from Terri Witek's poem "Gavros Ferry," part of a soundscape which, in combination with photographs on fabric by Cyriaco Lopes, make up the installation "Currents/Correntes," a collaborative project between Witek, a poet, and Lopes, a visual artist.

The artists explain that the origin of "Currents/Correntes" lies in Witek's book "Exit Island" (2012), where in order to embody "the mythical meeting of Ariadne and Dionysius in Naxos, one of the events alluded to in the book, Lopes printed an image of the sea of Rio de Janeiro on a large piece of fabric and imagined it as being part of the delirious dance of the god with the princess." In these poems the island, as Lopes describes, is a little bit Brazil, where he is from and where Witek lived as a teenager. This first photograph, an emblem, became the book's cover and along with the words, served as a departure for what has become an ongoing project between the two artists.

The photographs included in the exhibition, printed on fabric as well as mounted to acrylic, along with the accompanying sound, are the documentation of both a philosophical and physical investigation of the waters of their own origins, but also those waters in and between the places they now call their homes - New York and Florida.

"Looking out over water is such an ancient human position," Witek says, and the way Lopes could make that "static, hieratic gesture 'materialize' fascinated her." Witek continues, "The water fabrics seemed to argue that just as memories are carried, so whole oceans can be carried."

The poet Terri Witek and the visual artist Cyriaco Lopes have been collaborating since 2005. Witek often writes about art and Lopes investigates language in much of his work. By reinventing, interrupting and re-staging each other's words and images, they create a hybrid third possibility. Each distinguished in their own fields; Witek and Lopes' collaborations in video, performance, photography, drawing, and artists' books have been presented worldwide.

Cyriaco Lopes' work appeared extensively throughout his native Brazil, including the National Museum of Fine Arts, The Museums of Modern Art in Rio and Salvador and the São Paulo Art Museum (MASP). In the U.S., his work has been exhibited at The Contemporary Art Museums in Baltimore and Saint Louis, at El Museo and at Apexart in NYC and in art institutions throughout France, Germany, Italy, Poland, Chile, and Portugal. The recipient of numerous awards, including Stetson University Hand Award for Faculty Achievement (2007) and The Contemporary Art Museum Saint Louis Project Award (2003), Lopes has held artist's residencies at Skowhegan (2002), Parque Lage (1995) and the London Project (1994). He is a professor at John Jay College/CUNY in NYC.

Terri Witek is the author of "Exit Island," "The Shipwreck Dress" (both Florida Book Award medalists), "Carnal World," "Fools and Crows," "Courting Couples" (winner of the 2000 Center for Book Arts Contest), "First Shot at Fort Sumter/ Possum" (a poetry/comics chapzine) and "Robert Lowell and LIFE STUDIES: Revising the Self." A new book of poems, "Body Switch," is forthcoming. Her poems have appeared in American Poetry Review, Slate, Poetry, Threepenny Review, Hudson Review, and many other journals and anthologies, including Best of Poetry Daily 2007 and Old Flames-- 10 years of 32 Poems (2013). She has been awarded fellowships from MacDowell, The Hawthornden International Retreat for Writers, The Blue Flower Arts/ Atlantic Center for the Arts, Sewanee, and the state of Florida. A professor of English at Stetson University, where she directs the creative writing program, her summer faculty positions have included the West Chester Poetry Conference, the Prague Summer Literary Program and the DisQuiet International program in Lisbon, where she and Cyriaco Lopes run "The Fernando Pessoa Game."

This exhibition was generously supported through a grant from The Community Foundation for Northeast Florida.

For further information on the exhibition and related programs, please visit the website at www.flagler.edu/crispellert, or contact Julie Dickover at 904-826-8530 or crispellert@flagler.edu. The museum's hours while classes are in session are Monday through Friday, 10 a.m. to 4 p.m., and Saturday, 12 to 4 p.m.