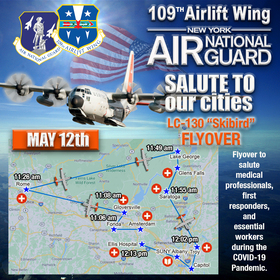 The NY Air National Guard's 109th Airlift Wing conducts a 12-city flyover on May 12 to salute healthcare and essential workers, and first responders.

SCOTIA, N.Y. (05/09/2020) (readMedia)-- NOTE: A press release distributed by the New York State Division of Military and Naval Affairs on Friday, announcing the 12-city flyover being conducted on May 12 by the 109th Airlift Wing of the New York Air National Guard, included a graphic that contained a typographic error. We are re-sending the announcement with the corrected graphic attached.

The Division of Military and Naval Affairs regrets the error. The Press release is below.

Beginning at 11 a.m., "Skier 95" will pass over Amsterdam, Fonda, Johnstown, Gloversville, Utica, Rome, Lake George, Glens Falls, Saratoga, Troy, Albany and Schenectady. The plane, which is equipped with skies to land on ice and snow, will dip down to 500 feet as it passes over area hospitals.

The flight is being conducted as part of the U.S. Air Force's nationwide salute to medical professionals, first responders, and essential workers during the COVID-19 pandemic.

"This flyover is a way for the men and women of the 109th Airlift Wing, and the New York Air National Guard, to say "thanks" to the essential workers, medical personnel and first responders who are there for all New Yorkers during this time, " said Col. Michele Kilgore, the commander of the 109th Airlift Wing. "We live in the communities they serve and we deeply respect the work they do for all of us every day. "

The ski-equipped aircraft are designed for operations in the Arctic and Antarctic and are marked with orange wings and tails so they can be located if they are forced to land on a white ice field.

The flight also demonstrate that the Air Force maintains the readiness required to defend the United States.

Skier 95 will take off from Stratton Air National Guard Base at 11 a.m. and head west at a speed of 241 miles per hour.

The flight path will take the aircraft over these locations:

Six Airmen will crew the aircraft. They are:

"Our crew is honored and humbled to have an opportunity to show our support and respect for the people on the frontline," Caldwell said. "We are very grateful for our first responders, medical professionals, and the essential workers that are getting us through this difficult time. They are the best of America."

The flights happening across the country serve as training for pilots and aircrews and do not cost any additional dollars, according to the Air Force.

The 109th Airlift Wing flies the largest aircraft in the world equipped to land on ice and snow in the Polar Regions.

The wing's Airmen support the National Science Foundation's United States Antarctic Program by flying supplies and people around the continent. The research done by those scientists provides critical insights into a number fields ranging from astronomy to climate science.

The wing also supports research conducted on the Greenland ice cap and flies missions in support of the Canadian Forces in the high Arctic.