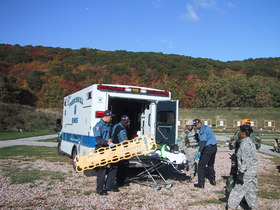 The drill should run from 0900 to 1100 and area residents may see ambulance and medical evacuation helicopter traffic in the area.

In addition to Camp Smith military personnel the Peekskill Volunteer Ambulance Corps, the Continential Village Fire Department and Lifenet of New York will participate in the exercise.

The exercise scenario revolves around a military vehicle crash that injuries three Soldiers. The simulated casualties will be treated and evacuated by ground and air to area hospitals will also be simulated.

The drill, said Col. Mark Warneke, the Camp Smith Post Director, allows the National Guard and civilian first responders to iron out the details involved in a medical emergency.