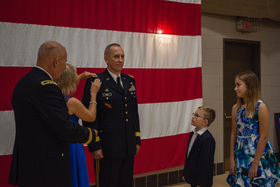 Brig. Gen. Jack James being promoted on July 20, 2019. James has been named commander of the 53rd Troop Command.

Brig Gen. Jack James will replace Brig. Gen. Michel Natali as the commander of 4,000 National Guard Soldiers who drill at armories across the state, from Long Island to Buffalo. Natali is moving into a new position as head of the New York Army National Guard.

WHO: Brig. Gen. Jack A. James, the incoming commander; Brig. Gen. Michel A. Natali, the outgoing commander; Maj. Gen. Ray Shields, the Adjutant General of New York and the presiding officer; leaders of the 53rd Troop Command from around the state.

WHAT: A traditional change-of-command ceremony in which the colors, or flag, of the 53rd Troops Command will be transferred from the outgoing commander to the incoming commander. Traditionally the unit colors indicate the commander's location on the battlefield. The traditional military ceremony allows the Soldiers to see who they will follow in battle.

The event will take place at the Camp Smith Parade Field and leaders from the 53rd Troop Command elements from across the state will be present with their colors for the event.

The 53rd Troop Command, which is headquartered at Camp Smith Training Site and headed by a one star general, is one of two general officer commands in the 10,000-member New York Army National Guard. The other is the 42nd Infantry Division based in Troy, N.Y.

During snowstorms, hurricanes, and other weather emergencies the 53rd Troop Command is responsible for overseeing New York National Guard operations in the Hudson Valley.

James graduated from the United States Military Academy at West Point in 1992. He attended the Aviation Officer Basic Course and flight school at Fort Rucker, Ala. where he qualified in the AH-1 Cobra attack helicopter.

James deployed to Haiti for Operation Uphold Democracy in 1995 and to Bosnia-Herzegovina as Commander of R Troop of the 4th Squadron, 3rd Armored Cavalry Regiment in 2000.

In 2011 James assumed command of the 642nd Aviation Support Battalion in Rochester, New York. He led his battalion for State Active Duty in response to Hurricane Sandy in November 2012, and in 2013 mobilized and deployed to Kuwait in support of Operation Enduring Freedom. The battalion provided aviation maintenance and sustainment to the 42nd Combat Aviation Brigade through August 2014.

He is a Pilot-in-Command in the UH-60 Blackhawk and is rated in the AH-64 Apache, AH-1 Cobra, and UH-1 Huey helicopters, and several fixed wing aircraft.

James is married to the former Lesia Koropey and has three children: Katherine, Juliana, and Nicholas. In his civilian career, he is a Corporate Vice President at the New York Life Insurance Company.

A native of Watertown, N.Y., Brig. Gen. Michel Natali was commissioned into the Military Intelligence Corps in May 1987 after receiving a Reserve Officers Training Corps Commission from Norwich University in Northfield, Vermont.

On December 3, 2016 Natali assumed command of the 53rd Troop Command.

Natali holds a Bachelor of Arts Degree from Norwich University, a Master's in Public Administration from Marist College and a Master's in Strategic Studies from the United States Army War College.

Natali is currently assigned as the full-time Assistant Adjutant General Army and detailed as the Deputy Commanding General for National Guard Affairs at the United States Army Cyber Center of Excellence.

Natali and his wife Barbara have three sons and two daughters.