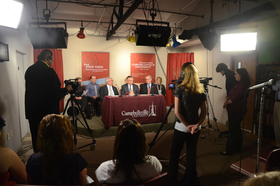 CAMPBELLSVILLE, KY (04/02/2012)(readMedia)-- You might be noticing a lot of blue pinwheels in April on Campbellsville University's Stapp Lawn and at Taylor County Elementary School in support Child Abuse Prevention Month.

A proclamation in support of the effort to educate communities about the event was signed last week at Campbellsville University on the "Dialogue on Public Issues" TV show of WLCU and featured live on WLCU 88.7 FM radio.

John Chowning, vice president for church and external relations and executive assistant to the president at CU, is host of the show, which is aired on WLCU five nights a week.

Chowning said child abuse is "much too rampant in the state and nation."

Campbellsville Mayor Tony Young and Taylor County Judge/Executive Eddie Rogers signed the proclamation the purpose of which is to draw attention to the child abuse problems in the commonwealth and nation.

The city and county will "dedicate our support to children and parents," Rogers said. Young urged parents to "let your children know they are special."

Anthony Harris with the Cabinet for Health and Family Services' Department for Community Based Services said Taylor County had about 200 calls in 2010 concerning child abuse with 255 children involved in those calls. Sixty-eight of the calls were substantiated.

Harris said child abuse is "prominent and prevalent" in Taylor County, and Rogers urged the need for mentors for children. Harris said the community needs to keep an eye out on families in crisis, and abuse can be physical, neglect or sexual in nature.

Harris said child abuse in Taylor County is in line with other communities in Kentucky.

Kentucky Revised Statutes require everyone to report child abuse, and Harris said people should call about abuse "if you have a gut feeling something is not right."

Claire Stephan, coordinator of donor development with Prevent Child Abuse Kentucky, said everyone should "commit to prevent" child abuse and the blue pinwheels are symbols of "hope and promise" as one envisions children running through fields with pinwheels with the wind in their hair.

Dr. Helen Mudd, associate professor of social work, atCampbellsville University, said the university's students and faculty in the Carver School of Social Work are selling blue pinwheels for $1 each, with them being placed on Stapp Lawn on the CU campus and at Taylor County ElementarySchool.

Mudd said universities in Kentucky graduate over 700 social workers each year and most will work with child abuse or neglected children.

"We like to focus on prevention in the community," she said. "Child abuse is a community issue, and we want to help families as resources and assist before child abuse occurs," she said.

She said a conference for students and professionals will be in Taylor County Thursday, April 26 with Pam Eades, director of the Children's Advocacy Center talking about how to keep children safe, and Melody Pollard, a certified alcohol and drug counselor, as speakers.

Foster said their agency works with 10 counties, and she said it will not be unusual to see 3 and 4-year-old children placing pinwheels on courthouse lawns and other places.

Foster, a family engagement manager, said there are parent meetings held to point out and to report abuse.

Harris said child abuse can be neglect in the child's environment, lack of education and lack of medical care that can risk the health and welfare of children.

Neglect is seen in 70 percent of child abuse.

Harris said children most of the time will "tell you what is going on in their homes."

He said there has been an increase in reporting of child abuse, which could possibly be attributed to the economic times when despair runs in families and there is unemployment to contribute to parental problems.

Taylor County Judge/Executive Eddie Rogers, from left; John Chowning, vice president for church and external relations and executive assistant to the president and host of "Dialogue on Public Issues"; and Campbellsville Mayor Tony Young are among the participants in a press conference announcing April as Child Abuse Prevention Month. (Campbellsville University Photo by Joan C. McKinney)