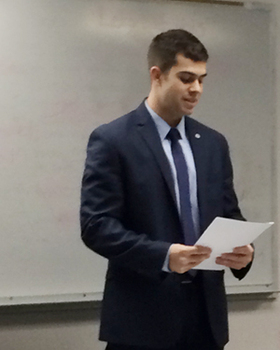 Wes Carter presents a paper at the Baptist Heritage and History Society.

Carter presented the paper in a breakout session at the BHHS conference in Nashville, Tenn. at American Baptist College.

Vivian is a minister and author who was a close friend and lieutenant of the late Rev. Martin Luther King Jr. during the American Civil Rights Movement.

"Having the privilege to present at the BHHC has been a tremendous opportunity of growth and maturation as I prepare to engage in further academic study and teaching," Carter said.

"I chose Vivian because he is someone who has been integral in the movement toward equality, yet in some circles he lacks the appropriate recognition. I want to do my part to spread his wonderful and inspiring story," he said.

Carter said Vivian is important to him because "I believe in equal rights for all people groups, and I admire Vivian for standing strong in his fight for Christian equality.

"We are all God's children. It is my prayer we will treat one another with the equality and respect each person deserves."

Dr. Joseph Early Jr., associate professor of theology at Campbellsville University, said Carter has been his student in many graduate classes. He said Carter expressed an interest in speaking at a professional conference, and Early thought of Baptist History and Heritage.

Early is on the editorial board at BHH, and he helped him get accepted and worked with him to have his presentation meet the standards of the highly respected organization.

"Wes worked very hard on this paper, and it was demonstrated at the conference," Early said. "For his first time presenting a paper, I thought he did an excellent job. I was very proud to be his professor."

Carter's paper will be peer reviewed and considered for publication.

The non-profit Baptist History and Heritage Society is the leading scholarly organization for Baptist historians in America. The society integrates scholarship into top-notch congregational resources in the form of publications, printed and digital resources, conferences, seminars, dialogue and special events. The Society represents Baptists around the world and is funded by membership dues, the generosity of donors and grants.

Carter is employed as assistant director of church outreach at Campbellsville University and also serves as an adjunct instructor in business and theology at CU. He has spoken in over 150 churches in the past three years.

He is the son of Dr. Michael V. Carter, president of Campbellsville University, and his wife, Debbie.

second from left, attended their son Wes' presentation at the Baptist History and Heritage

Society. With the Carter family was Wes' sister, Alicia Shea, Wes and his girlfriend, Ariel