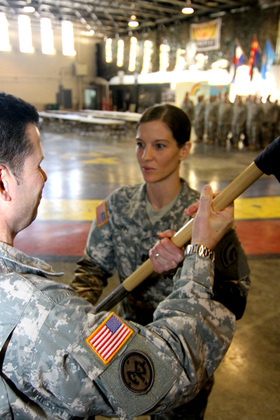 She replaces Capt. Luana Dupigny, a Syracuse resident, who will be moving on to the 427th Brigade Support Battalion staff.

Ponn enlisted in the New York Army National Guard in 2004 and received her commission as a second lieutenant through the Reserve Officers Training Corps program at the University of New Hampshire in 2008. She assumes command of over 200 Soldiers.

She holds a bachelors degree in animal science from the University of New Hampshire and is currently enrolled in the nursing program at Northeastern University in Boston.

"Captain Ponn, this is a great day for you. Thank you for stepping up and taking the company guidon and shouldering the responsibility of command." said Lt. Col. Christopher Panzer, the battalion commander.

"Command is not guaranteed to all officers, this is a great achievement with a lot of work and a lot of reward."

"Thank you for this opportunity to lead my fellow Soldiers," Ponn said. "The Soldiers are the life support of the division and I look forward to continuing to build our team."

The 42nd Infantry Division is the higher headquarters for four National Guard Brigade Combat Teams in New York, Massachusetts, New Jersey and Vermont, as well as units in New Hampshire and several other states.

The Headquarters Support Company provides life support and other services needed to keep the division staff functioning in combat.

In 2004 the 42nd Infantry Division mobilized at Fort Drum and deployed to Iraq in January 2005 to assume command over two National Guard and two Active Army brigades during 2005.