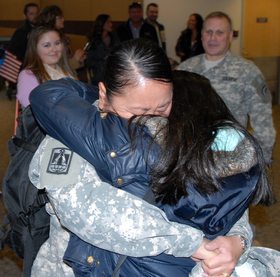 Sgt. 1st Class Theresa Barone-Lopez embraces her daughter Juliana at the Albany International Airport on Jan. 27, 2016. Barone-Lopez was among 20 Soldiers who returned from deployment.

About 50 Soldiers of the 42nd Infantry Division, which is based in Troy, N.Y., deployed to Guantanamo Bay Naval Base in April 2015. They served as members of the headquarters element for Joint Task Force Guantanamo, and provided administrative support to the task force.

This was the fourth time New York Army National Guard Soldiers have deployed to serve as part of Joint Task Force Guantanamo. A fifth unit, the 442nd Military Police Company, based in Jamaica, Queens, mobilized in early January for service at Guantanamo Bay for security missions. That unit is expected back by the end of the year.