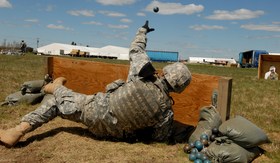 More than 2,200 members of the New York Army National Guard will mobilize later this year and are expected to deploy to Afghanistan in early 2012.

The training at Fort Drum includes nearly 300 Soldiers from the 27th Brigade's Headquarters and Headquarters Company, along with elements of the Brigade Special Troops Battalion and 427th Brigade Support Battalion.

Key leaders from across the brigade deployed to Fort Drum in early May to conduct their individual training tasks and allow them to supervise and lead their units during the remainder of the training cycle.

The rotation of forces has approximately 750 Soldiers on the ground at Fort Drum at any given timeframe for training, with another 600 Soldiers from across the state providing training support, instruction, logistical support and administration of the entire scenario.

The overall effort of the premobilization training began on May 1 and will continue with unit rotations through June 10.

News media are invited to attend the training as the Soldiers conduct a variety of individual and small unit training tasks.

For more imagery, visit the NY National Guard website at www.dmna.state.ny.us or at www.flickr.com and search our photostream at NY Nationalguard.