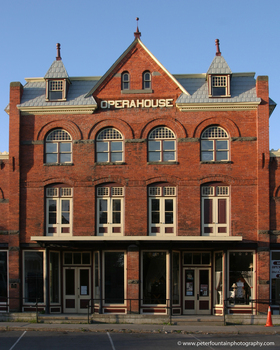 ALBANY, NY (06/11/2014)(readMedia)-- The Preservation League of New York State has awarded a Technical Assistance Grant (TAG) to a group directly engaged in the stewardship and public use of a historic building in Chenango County. A $3,000 grant to the Earlville Opera House will support the cost of an engineering structural analysis of the National Register-listed performing arts venue.

The Earlville Opera House has served as a focal point for community activities and the arts since 1892. Through the early 1920s, the Opera House provided a stage for live entertainment such as vaudeville acts, three-penny operas, and travelling medicine shows. Later, it was converted to a silent movie house, and then took on the role of public auditorium, hosting high school graduations and town meetings. But the curtain came down in the 1950s, and in 1971, the building was slated for demolition.

The not-for-profit Earlville Opera House, Inc. formed, took ownership of the building, and began restoration work immediately. Since then, the organization has fulfilled a dual mission: to provide the highest quality arts, cultural and entertainment events to their rural constituency; and to renovate and rehabilitate the Opera House's historic theater.

With charming stenciling, ornate pressed-tin ceiling and proscenium stage, the Opera House is one of few remaining examples of a building type that was once common in the area. However, the lack of climate control requires that the theater be closed during cold weather. In addition, dramatic seasonal changes in temperature and humidity are taking a toll on the auditorium's wood floor, upholstered seating and plaster walls, as well as a 1893 Chickering baby grand piano.

TAG funds will support updated analysis of the existing conditions at the Opera House, heating and cooling loads, and identification of costs and benefits of climate control options. Taitem Engineering of Ithaca will complete the analysis, which is an essential step in the installation of an energy-efficient heating and cooling system while preserving the building's architectural integrity.

"We are deeply grateful for this opportunity to begin the next step for this historic building that was once almost torn down and turned into a parking lot," said Patti Lockwood-Blais, executive director of the opera house. "A great deal has been invested both in terms of financial and volunteer resources in the Earlville Opera House since then. On behalf of all our artists and patrons, we are very excited about bringing the building into the twenty-first century. The study will help us to plan changes that will greatly expand the programming that we can offer the community."

The Preservation League of New York State launched the Technical Assistance Grant (TAG) program in 2012 to support discrete projects that preserve New York State's cultural and historic resources. With the spring funding round, TAG will have disbursed nearly $90,000 in grants, funding 40 projects in 28 counties. Grants of up to $3,000 are available to not-for-profit arts and cultural groups and municipalities managing historic sites, museums, arts facilities and other culturally important institutions that are located in historic buildings and structures open to the public.

"In a very competitive grant round, applicants sought funds for technical studies to be carried out by preservation and design professionals which included building conditions surveys, engineering and structural analyses, and feasibility and reuse studies," said Tania Werbizky, the League's Regional Director of Technical and Grant Programs in western New York. "The Preservation League is delighted to help advance the efforts of the Earlville Opera House with this grant."

Guidelines for application for the second of two grant rounds in 2014 will be available on the League's website in July. Applications must be received by Monday, August 25, 2014. A total of $15,673 is available statewide for the fall funding cycle, and funded work must be completed by the end of the calendar year. Each grant recipient must provide a $500 match and the cost of the project may not exceed $3,500.

The Preservation League of New York State is a private, not-for-profit organization that works to protect and enhance the Empire State's historic buildings, landscapes and neighborhoods. The Technical Assistance Grant Program is made possible by the New York State Council on the Arts with the support of Governor Andrew Cuomo and the New York State Legislature.

"The TAG program builds on the record of excellence the League has established with the similarly NYSCA-funded Preserve New York Grant program," said Jay DiLorenzo, President of the Preservation League. "Our TAG program fills a significant funding gap. It is tailored to provide support to worthy projects in New York that may be ineligible for grants from other sources, or may not have the scope or scale to compete at regional and national levels."

For more information on the League's Technical Assistance Grant program, please call 518-462-5658 or visit the League's website at www.preservenys.org.