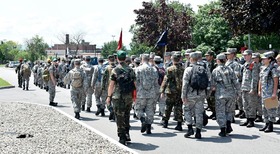 Civil Air Patrol Cadets preparing to board an aircraft during their encampent at Stratton Air National Guard Base on July 25.

WHO: Civil Air Patrol Cadets aged 12 to 20 from New York, Pennsylvania, Massachusetts and Connecticut will participate in the ceremonies. This marks the conclusion of the Civil Air Patrol Leadership Encampment at Stratton Air National Guard Base throughout the week.

WHAT: The graduation event will mark the conclusion of the Civil Air Patrol Leadership Encampment at Stratton Air National Guard Base which began on July 20. Throughout the week the cadets have worked together, learned new leadership skills, and gotten the chance to ride on UH-60 helicopters, LC-130 cargo planes and the C-17 strategic transport. Cadets will be recognized with awards during the ceremony.

Members of the media MUST contact Senior Master Sgt. William Gizara by calling 518-248-3799in order to gain access to the secure facility.

Media members will have an opportunity to interview cadets and Civil Air Patrol Leaders. There will be still and video imagery opportunities with cadets marching in formation and receiving awards.

The Civil Air Patrol Cadet Program allows young people -- ages 12 to 21-- to progress at their own pace through a 16-step program including aerospace education, leadership training, physical fitness and moral leadership. Cadets compete for academic scholarships to further their studies in fields such as engineering, science, aircraft mechanics, aerospace medicine, meteorology, as well as many others.

Those cadets who earn cadet officer status may enter the Air Force as an E3 (airman first class) rather than an E1 (airman basic).

Stratton Air National Guard Base is the home of the 109th Airlift Wing. The wing flies the largest ski-equipped aircraft in the world, the LC-130, and provides support to research in the Antarctic and in Greenland.