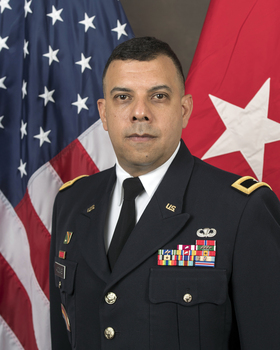 Andonie has been selected to become the deputy director of the Army National Guard, which consists of 336,000 Soldiers in the 50 states, three territories and the District of Columbia.

Members of the press are invited to cover the promotion.

WHAT: Promotion of Brig. Gen. John Andonie to Major General. Andonie has served as a one-star general since Nov. of 2018. In his new role he will serve as the deputy to Lt. General Jon A. Jensen, the director of the Army National Guard.

Members of the press will be able to interview Major General Andonie following his promotion. The promotion will take place before a giant American flag.

For access to this secure military facility, media members must all the Division of Military and Naval Affairs Press Office at 518-786-4581. This will be a socially distant event.

John Andonie, a graduate of the United States Military Academy at West Point, has served as the New York National Guard Director of Joint Staff since November, 2018.

In that position he was responsible for coordinating operations and activities involving both the New York Army and Air National Guard, as well as the New York Naval Militia and New York Guard. He was responsible for organizing the responses to weather emergencies as well as the response to the COVID-19 pandemic and the movement of New York Army National Guard Soldiers and Airmen to Washington, D.C. to protect the 50th Inaugural.

Andonie will be replaced by Colonel Isabel Smith, who is currently serving as the New York National Guard director of operations.

Prior to taking that job he served as Chief of Staff of the Army National Guard.

Andonie was commissioned as an armor officer through the United States Military Academy in 1989. He served in the Active Army and moved to the capital region in 1998 to serve as the Assistant Professor of Military Science at Siena College in Loudonville. He served in that position until 2000 when he joined the New York Army National Guard's 42nd Infantry Division.

Andonie was first assigned to the 194th Separate Armored Brigade at Fort Knox, Kentucky where he served in a number of basic officer positions. In 1995 he was assigned to the 11th Armored Cavalry Regiment at Fort Irwin, California where he served as a regimental and squadron staff officer. He also served as Commander of Troop a, 1st Squadron, 11th Armored Cavalry Regiment.

The 11th Armored Cavalry Regiment serves as the Opposing Force or OPFOR for U.S. Army and Marine Corp armored and mechanized units training at the Fort Irwin' National Training Center.

As a member of the 42nd Infantry Division Andonie served as chief of plans, deputy operations and operations officer.

In 2004-05 he deployed to Tikrit Iraq as the deputy operations officer of the 42nd Infantry Division. Andonie was in charge of the day-to-day operations of the division's tactical command post in Tikrit, Iraq.

After returning from Iraq Andonie served as the commander of the 1st Battalion, 69th Infantry-New York City's famous "Fighting 69th" regiment - and as the Deputy Joint Operations and Operations Officer for the New York National Guard.

Andonie holds a Bachelor of Science degree in history from the United States Military Academy and a masters of business from Rensselaer Polytechnic Institute and he is a graduate of the United States Army War College.

Andonie and his wife Kathy, an adjunct clinical instructor and staff RN at Northeast Health,have two daughters: Rachel and Elizabeth.

The Army National Guard is the oldest component of the United States armed forces. The Army Guard traces its history back to the militia companies formed with the first English settlement at Jamestown in 1607. The first militia regiments were organized by the General Court of the Massachusetts Bay Colony in 1636 and the Army National Guard claims Dec. 13, 1636 as its birthday.

Beginning with the Pequot War in 1637, the Army National Guard has participated in every war or conflict this nation has fought; most recently in the wars in Iraq and Afghanistan.

With a strength of 366,000 Soldiers in the 50 states, three territories and the district of Columbia, the Army National Guard is one of two reserve components of the Army. The other is the Army Reserve which has a strength of 199,000 Soldiers.

The director of the Army National Guard is responsible for formulation, development and implementation of all programs and policies impacting that force.