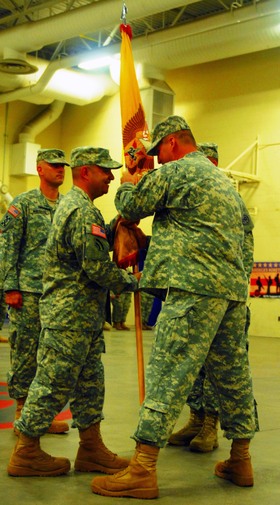 Clare replaced  Lt. Col. Scott Jessop, who is now serving as  deputy commander of the 153rd Troop Command in Buffalo, during a traditional Change of Command ceremony presided over by Col. Joseph Biehler, commadner of the 27th Infantry Brigade Combat Team.

The 427th Brigade Support Command handles the logistical support for the 4,000 Soldiers of the New York National Guard's 27th Infantry Brigade Combat team. The brigade is headquartered in Syracuse but has units located across New York from Farmingdale on Long Island to Jamestown in Chataqua County.

Clare is originally from Weedsport, where he still has family, and graduated from Jordan-Eldridge High School.

Clare has served in leadership positions at the company, battalion and division level, and in a number of staff assignments.

Clare is a full-time employ of the New York National Guard, serving as a civilian technician responsible for Army National Guard vehicle maintenance throughout New York. He will continue to work full-time in that position while serving as the traditional Guard Soldier commander of the 427th.

Clare holds a bachelor's of science from Nyack College and is a graduate of the Army Command and General Staff College.

He and his wife Nichol have a son, Ryan, and a daughter, Michaela.