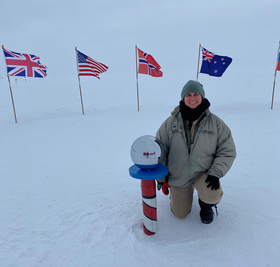 Col. Michele Kilgore, the commander of the 109th Airlift Wing, at the South Pole in February, 2020. Kilgore is leaving the wing after three years in command.

SCOTIA, NEW YORK (12/10/2020) (readMedia)-- New York Air National Guard Col. Michele Kilgore, commander of the 109th Airlift Wing since 2017 will be moving on to a new position at the Pentagon next week.

Col. Christian Sander has been named the next commander. He is currently deployed for Operation Deep Freeze until February 2021.

In the meantime, Col. Rob Donaldson, the wing commander, will be leading the unit until Sander's return.

Kilgore's last day at the 109th will be on December 14th and she will begin her new job immediately as Political-Military Affairs Officer for the Joint Chiefs of Staff office for Strategic Plans and Policy, JCS-J5.

That assignment will entail working in the Strategy, Plans & Policy Directorate which provides recommendations to the Chairman of the Joint Chiefs of Staff.

Her new assignment will on Political-Military Affairs in the Western Hemisphere Division.

Kilgore explained the position is suitable for her education background in political science, with an emphasis in Latin America studies, and a minor in Spanish. She also has a master's degree in national security studies.

"Col. Kilgore's high level of enthusiasm, engagement, vision and commitment in leading the unit over the past three years has kept the 109th Airlift Wing in the forefront of emerging arctic operations," said Command Chief Master Sgt. Jeffrey Trottier, the senior enlisted leader in the wing. "Her leadership has leveraged our wing to meet the needs of the recently released Air Force Arctic Strategy."

During her command tour, Kilgore said she spent a lot of time explaining the wing's mission in Canada, Greenland and Alaska to civilian and military leaders.

The fact that the 109th is mentioned specifically as an asset in the United States Air Force Arctic Strategy, published earlier this year, reflects the importance of the wing in arctic operations, she said.

"Col Kilgore is one of those exceedingly rare leaders with an impressive diverse background," said Maj. Gen. Timothy LaBarge, the commander of the New York Air National Guard.

"Combine this with a penchant for detail, a unique ability to connect and communicate and a remarkably professional group of airmen at the 109th, you have a recipe for a superior command tour – which is exactly what we have witnessed over the last three years at the 109th," LaBarge said.

Kilgore said her most memorable moments at the wing where the times she participated in exercises and joint operations, along with the wing's annual deployments to Antarctica and Greenland.

"The best part of the job is being boots on the ground with the people where the mission happens," Kilgore said.

"The execution side of the mission is very rewarding," Kilgore said.

"Working so far in the future on planning and programming initiatives, however, means you don't always see the immediate reward. As a leader you put in long hours behind the scenes planning and budgeting to make sure the wing is set up for success," Kilgore said.

"When you go on a deployment or an exercise, you can see all the hard work come together to complete the mission," she added.

Kilgore said she took pride in her efforts to make sure the unit had what it needed to achieve success; making sure budgets were correct, recruiting the next generation of Airmen, advocating for new and improved airplanes, new buildings and renovations to base security.

"Ultimately the job of the commander is to get resources into the hands of the people who accomplish the mission," Kilgore said.

According to Kilgore, one of the most challenging times she faced as a commander has been dealing with the COVID-19 pandemic and challenges it has presented to the unit members and continuing to meet mission requirements.

To help combat the personal stress of pandemic, she sought out simplicity, spending time with family, reading and exercising, she said.

Despite the challenges of the past three years, Kilgore reflected fondly upon her time as commander of the 109th.

"I am privileged to lead the 109th Airlift Wing. My life is forever changed because of the people I met and worked with over the last three years. My chapter here may be closing, but like any good story or book, I can't wait to see what happens next," Kilgore said.