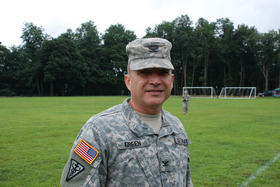 MEDCOM, based at the Watervliet Arsenal, is a small unit, with less than 100 Soldiers, but its members are responsible for monitoring the health and ability to deploy on both state and federal missions for more than 10,000 Soldiers around New York.

Green joined the New York Army National Guard in 1996 as the dental officer for Company C, the medical support company of the 427th Forward Support Battalion. In March 2003 he took command of Company C, which was located in Saratoga Springs.

Following a reorganization of New York Army National Guard units the company became the 466th Area Support Medical Company in headquartered in Queensbury,  and deployed to Iraq in 2006-2007 with Green as the commander. The unit operated an Army Field Hospital and three troop medical facilities in south and central Iraq and received a Meritorious Unit Citation for its service.

Green has been serving as deputy MEDCOM commander since October 2013.

Green's awards include the Bronze Star, the Iraq Campaign Medal, the Army Commendation Medal, the National Defense Service Medal, the Global War on Terrorism Medal, and the Army Achievement Medal.

Green and his wife Elizabeth have two adult children, John and Caroline, and live in Saratoga Springs.

Sullivan, an Ithaca resident, responded to the attacks of Sept. 11, 2001 with the New York Army National Guard, served in Iraq in 2005 with the 42nd Infantry Division and with the 27th Infantry Brigade Combat Team in Afghanistan in 2008. She is retired from the Army National Guard after 37 years of service.