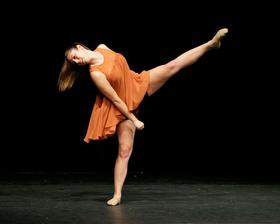 CAPE GIRARDEAU, MO (11/05/2012)(readMedia)-- Southeast Missouri State University student Danielle Albertina of Collinsville, Ill., recently auditioned with Ashleyliane Dance Company, a full service dance organization based in the Greater St. Louis area, and was accepted as one of their company members. She had previously attended master classes and other training with the company and will begin dancing professionally with them after graduation.

Danielle also just completed her fourth summer with the Universal Dance Association. She says she plans to continue working for them by choreographing for their summer material, which is taught at camps nationally, and by judging competitions.

"It was an amazing opportunity for growth as a dancer," she says. "The days were 10 hours of jam-packed dancing."

During the intensive, Danielle worked with such prestigious people in the dance world as Paula Young David and Brandon DiCriscio.

"That week pushed me physically, mentally and emotionally," she says. "It was so rough on my body as well as challenging to remember all the material and try my best to execute it well creatively and technically while trying to keep a positive and confident attitude about my own dancing when I was surrounded by such talented and well known professionals."

At the end of the week, Danielle spent an entire day attending their company auditions to get some experience auditioning.

"This was challenging for me, because my body and brain were exhausted from the days before hand, but in the long run I was really happy I pushed through to get the experience," she says.

Also last summer, Danielle traveled to New York City with the Department of Theatre and Dance's "Senior Showcase" performers in May.

"This was my first time traveling to the city, and I instantly fell in love with the booming atmosphere," she says.

There, she took classes at Broadway Dance Center, a studio she says in which she dreamed she would be able to dance.

"Because of this experience, I am no longer intimidated by New York City and plan to return, whether for a trip or auditions," she says. "Only being able to stay there for five short days was such a tease. I want to go back and experience more."

Danielle is double-majoring in dance and human environmental studies with the option of family studies. Along with her dancing job at Ashleyliane Dance Company, she plans to get part-time work with a family studies-related field such as a safe house after graduation.

"Both fields have been very fulfilling to study," she says. "Family Studies has taught me so much about interactions, and more than that just between families."

"Both taught me so much about interactions, limitations and growing up as well as gave me the opportunity to meet and work with some amazing, hard-working and passionate staff members that both the programs have," she says.

This semester, Danielle is interning at the Safe House for Women.

"The staff members are great role models, personable and very enjoyable to work with," she says. "The clients who I've worked with there give so much respect and are more than admirable. I look forward to going in each day."

On campus, Danielle is an Omicron Delta Kappa honor society member. Through the organization, she gives back to the community.

"Everyone within the society is very motivated and reliable, and it's nice to be surrounded by them," she says.

Danielle also is a member of the Black Mask Honorary Dramatic Society, Southeast's theatre and dance honor society. Through her participation, she says she has grown closer with those on the theatre side of the Department of Theatre and Dance with whom, she says, she otherwise would not get the opportunity to work.

"Everyone in Black Mask not only is very creative and talented, but driven in their academic fields as well," she says.

Danielle previously was on the Sundancers, the University's dance team. She danced with the team her first year at Southeast through last spring.

"With the Sundancers, I had the amazing opportunity to dance at the OVC (Ohio Valley Conference) championships in Nashville, Tenn., for two years in a row," she says. "I was also fortunate enough to compete with them at Nationals in Daytona, Fla., this past spring. As a team member, I also participated in community volunteering, and it was nice to give back."

Since she has spent so much time with the Sundancers, she says some of these young women have become her closest friends.

"I couldn't have asked for a better collegiate team to dance with," she says.

Danielle chose to not be a Sundancer her last semester, because she says she wanted to be more involved in the dance showcase, "Fall for Dance." She was cast in three pieces this fall and is choreographing a piece of her own for the event. One of the pieces she was chosen to dance in is a guest artist piece, a restaged work of José Limón's "Psalm."

"This has been my biggest dance honor yet, because José is such an inspiration and idol, especially in the modern dance world," she says. "I never thought I would have the opportunity to be so closely tied with his work."

Brenna Monroe-Cook, a former José Limón Dance Foundation member, traveled to Cape Girardeau from Seattle, Wash., to share the work with the performers.

"I was so honored to have been able to work with her," Danielle says.

The dancers had intense hours of rehearsals the week Monroe-Cook was at Southeast, including the weekends and into the evenings.

"It was challenging but definitely worth it," Danielle says.

Danielle also was cast in choreography this semester by Hilary Peterson and Philip Edgecombe, instructors of theatre and dance.

"I'm very excited to work with them so closely before I leave Southeast," she says. "My choreography in the past has been selected for fall 2010 and spring 2011 concerts. I'm keeping my fingers crossed this year that it will make the cut."

Danielle says that dance at Southeast has pushed her to become a more creative, open-minded and stronger person and dancer.

"I learn something new each day I take classes, whether it is something I discover new within my own movement or finding something interesting in my classmates' choices or creativity within their movements," she says.

"It is gorgeous, and I feel very fortunate to have the facilities we have here at Southeast," she says. "All my heart and soul is always left on that stage. Dance classes with Hilary and saying thank you and giving everybody hugs at the end – I don't think there is any other educational setting where students genuinely thank the teacher for the class and everyone else in the class for giving their hard work and time."

Albertina says she has grown as a person since beginning at Southeast.

"I've learned so much about myself, other people and time management," she says. "I tend to overbook my schedule often, because I want to get as much from life that I can ... and, although it becomes overwhelming at times, while being here I've found many ways to multitask and adjust."

She says she credits her amazing support system at Southeast with helping her grow and succeed.

"My Southeast teachers have taught me so much more than just book material and have been very personable, real, understanding and helpful mentors. I've grown to be much more confident and assured because of them," she says.

Danielle transferred to Southeast in order to be a part of the University's Department of Theatre and Dance.

"It was one of the toughest decisions I've made in my college career, but I have no regrets at all and definitely believe things turned out for the best and exactly as they should have," she says. "Going into college as a freshman, I remember thinking I could never ever be a part of a professional dance company ... but I built up the courage to follow my dreams when I made the transfer, and now it's finally coming true!"

Danielle encourages future Southeast students, "Make goals ... even the smallest, attainable ones that will help in getting you to your big future ones – no matter how farfetched your big dream may seem. Keep working hard, and never settle. Make sure to save some time for fun. Be respectful and kind to everyone you meet because it truly is a small world."

Posted Monday November 05, 2012 at 11:26 am by Southeast Missouri State University