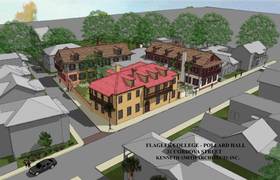 ST. AUGUSTINE, FL (07/22/2014)(readMedia)-- Flagler College is opening its doors to the public to unveil the latest addition to its campus: Pollard Hall.

Guests are welcome to check out the new academic building from 4:30 to 6 p.m. on Friday, August 22. The 18,600 square-foot complex includes nine classrooms, five offices, a television studio and multiple common areas.

In addition to Pollard Hall, visitors can also tour the studios of the Flagler College radio station, WFCF, where they can meet on-air personalities and even record their own voice for radio broadcast. Light refreshments will be served.

Pollard Hall replaces the college's communication building and is located at 31 Cordova St. Nelson Pollard provided the major gift for the construction of the new academic building, which will bear his family name. His brother, Lewis Pollard, is a member of the Flagler College Board of Trustees and has served as a board member since 1999.